(MOTP) Georgetown, Guyana – (August 30, 2016) The Commission of Inquiry that was tasked by President David Granger to examine the conditions and circumstances facing veterans of the Guyana Defence Force (GDF), the Guyana People’s Militia and the Guyana National Service (GNS), is set to commence formal interviews from tomorrow, August 31, 2016. This Commission is scheduled to conclude in October. 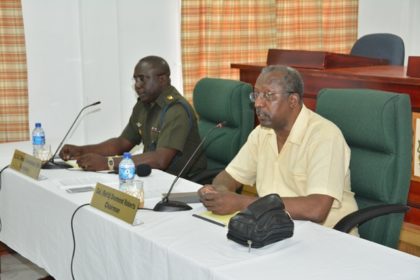 This was announced by Chairman of the Commission, Col. (Ret’d) Desmond Roberts today at a press conference at the Department of Public Service in Waterloo Street, Georgetown. The first set of persons lined up to be interviewed are the present heads of services as well as former chiefs of staff of the GDF including Rear Admiral (Ret’d) Gary Best and Retired Major Generals Norman McLean and Michael Atherley.

“We don’t want to see our veterans on the streets. It happened in several countries where veterans are among majority of the homeless. We do not want to see that in Guyana. We want to provide housing, entrepreneurial opportunities and good jobs if they need it, because they leave at 40 years old, they are still young people,” Col. Roberts said.

Additionally, the Commission will be examining ways to improve the Veteran’s Home and other issues, including the benefits provided to the families of those who are deceased and displaced records of veterans’ contributions to the National Insurance Scheme (NIS).

The Commission’s Secretary, Col. Denzil Carmichael informed that so far, 34 summons have been sent out by the Commission to the joint services, the private sector and the private banking institutions. This was followed by a two week sensitisation programme to assist persons in preparing written submissions.

The Commission, in a release stated that, “veterans are required to retire when they are still comparatively young and several have been adversely affected by a life of privation, exposure to unhealthy conditions and extended periods of away from home and career development opportunities. Their sacrifice and service to their country should not be ignored.”

Last year, at a Remembrance Day reception, President Granger announced the convening of a National Veterans’ Commission to look into the living conditions of veterans and make recommendations for improvements. On that occasion he also announced the return of a fixed annual State subvention for the Guyana Veterans’ Legion.

The Head of State is firmly of the view that young military officers must know that they can look forward to a comfortable and dignified retirement.