Councillors of the mining town of Linden raised their concerns about forestry and bauxite industries’ operations in their community when the Parliamentary Sectoral Committee on Natural Resources visited on Thursday.

The Committee met with a small gathering of Regional and Municipal Councillors, businessmen and representatives from the natural resources sector at the Constabulary Recreation Hall in Linden.

Chairman of the Committee, PPP/C Member of Parliament, Odinga Lumumba told the gathering that the meeting was to “get a sense of what’s happening” with the communities and the companies which operate in the natural resources sector.

“As a committee, we get together, we pool the information then we have a hearing with the (subject) Minister and raise the questions we hear here; we put it to the Minister and with our recommendations, and we try to come to a common position,” Lumumba explained to the Government Information Agency (GINA).

Councillors meanwhile wasted no time in airing their concerns about the issues the Region 10 community is facing. Linden’s main economic activity is its bauxite production and this was a priority concern for Councillor Charles Sampson.

Sampson told the committee, which also comprised APNU+AFC Member of Parliament Audwin Rutherford and PPP/C Member of Parliament Pauline Sukhai that bauxite is a valuable resource and it was not receiving the attention it should He also queried the quality of bauxite that is being exported.

“I’m wondering if I can go to any government institution today, especially the Ministry of Natural Resources and find out from them what quality of bauxite is being taken out in every shipment of bauxite that leaves our shores,” Sampson queried.

The councillor said there should be laboratories to analyse the quality of bauxite being exported from Guyana. “We must be able to verify,” Sampson insisted.

Sampson added that he was very concerned about the treatment of workers who mined the mineral. Unions in particular should “step up” their representation of workers, he noted.

However, Lumumba pointed out that the committee failed to reach out to residents in the area before that meeting. This time around, Lumumba said when the committee meets with Bosai, he hopes to fairly represent the residents and their concerns raised.

Assurances were given that the concerns raised at the meeting will be forwarded to Minister of Natural Resources Raphael Trotman. “We cannot tell the government what to do, we can advise the government or try to get a sense from the government where they are going…and get input from the community,” Lumumba cautioned.

Meanwhile, Regional Councillor and Assistant National Director of the Community Development Council, Sandra Adams called for the relocation of the forestry office in the community. 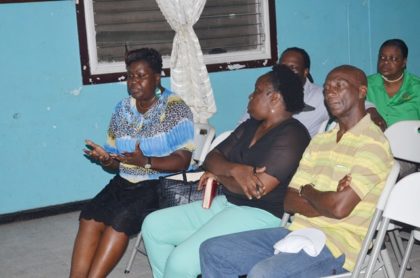 “Where it is located definitely is a bad spot because when you have two or more trucks to be checked and to be inspected, it protrudes out on the road and it’s around a turn. So a driver coming from west to east, approaching the highway from in the township of McKenzie to see around that truck is impossible,” Adams explained.

Adams said she sought the intervention of the Guyana Police Force in the matter but was informed that it would have to be addressed by the Ministry of Natural Resources through the Guyana Forestry Commission.

Another Regional Councillor and resident of Kara Kara, Linden Denise Belgrade expressed her concern about the log-bearing trucks on the roadway. 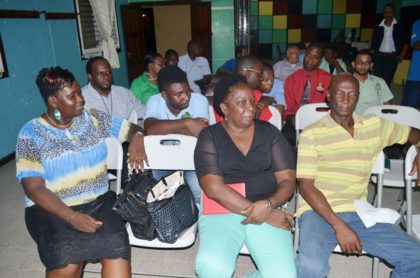 “It’s very bothersome when we observe the way that area is being used by those big logging trucks that are loaded with logs. For me, the logs look kind of unsafe with the chains,” Belgrade said.

Adams suggested a restriction of logging trucks on the roads especially at nights while another stakeholder suggested implementation of a toll system to have the heavy-duty vehicles pay for using the roadways.