The Guyana Elections Commission (GECOM) has received the approval of the National COVID-19 Task Force (NCTF) to utilise its proposed 10 workstations for the national recount of the ballots of the March 2, 2020, General and Regional Elections.

The recount is scheduled to take place at the Arthur Chung Conference Centre (ACCC).

GECOM’s Public Relations Officer, Yolanda Ward told members of the media today that the task force has agreed to eight stations containing 14 persons each while the remaining two stations will hold 10 persons each. 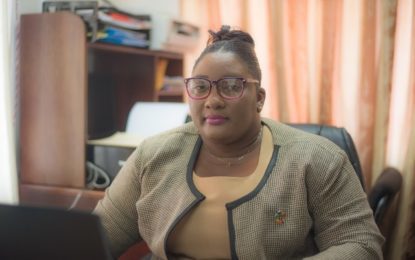 This allows for a total of 132 persons present during the recount process.

Following a visit to the ACCC on Monday, the NCTF, chaired by Prime Minister Moses Nagamootoo, presented its report to the elections commission, which also included 14 recommendations the commission should follow to ensure the safety of all involved.

The task force recommendation of sanitising surfaces, she noted will form part of the commission’s implementation plan that will also see ballot boxes being sanitised.

In the meantime, the commission is meeting today to finalise the draft order which was prepared for the methodology for the implementation of the recount exercise. Ward said that order was prepared against the legal framework regarding the number of persons required to be at the recount, among other things.

“In any operations with GECOM, we have to move forward from a legal standpoint. When a decision of a national recount was considered, one of the things was to have the protocols gazetted in an order. The order was circulated. The meeting today is to peruse that order to ensure that it reflects the decision of the commission’s methodology for the recount.”

Once that order has been finalised, she said the commission will proceed to gazette and publish it. Critical to the order, she noted is a commencement date for the recount. That start date relies on several other factors, including a response from CARICOM.

So far, the commission has not yet received any travel arrangements from the CARICOM high-level team.