As a result of heavy rains in the early hours of Friday 24th, May, the village of Black Bush Polder has experienced flooding, with some sections of the village still affected. Over the past few days, a series of works has been done to remedy the issue. 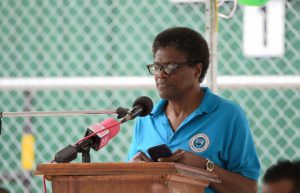 Surprisingly, BiBi Sharmine, a Yakusari Neighbourhood Democratic Council councillor, has been quoted in sections of the media saying the National Drainage and Irrigation Authority (NDIA) is to be blamed for the village still suffering from flooding.

However, in an invited comment, Chief Executive Officer of the NDIA, Mr. Fredrick Flatts has refuted these claims, noting that the persistent flooding is a result of issues not related to the authority.

“I’ve seen the reports and I wish to say this – the responsibility for drainage works in the area is as such where the NDIA is responsible for clearing the outfall channels and mechanical repairs of the drainage pumps. Activities such as cleaning of the Yakusari main drain, operation of the drainage pumps and sluices are responsibilities of the Regional Democratic Council,” Flatts said.

The CEO went on to note that the NDIA commenced clearing Black Bush outfalls at Joppa, Adventure and Eversham on May 14, 2019 and by May 23, 2019 the outfalls were cleared and sluices operational. The system of clearing outfall channels along the coast is directly dependent on having sufficient water in the system.

“After the RDC’s contractor was unable to clear the Yakusari main drain which conveys water to the sluice and pump, NDIA’s assistance was requested. We mobilised a contractor with two excavators to excavate the channel on May 24, 2019. During the seven days – from May 23, 2019 to May 30, 2019 – whilst water levels were significantly high, the RDC underutilized the 200 cubic feet per second drainage pump at Joppa where is was  operated for only 5hours 10mins,” Flatts added.

“The water level in the Yakusari area is receding slowly and our engineers and extension staff are monitoring the system daily. Rice farmers are also releasing water into the system at this stage of the rice crop. NDIA will continue to offer assistance to the residents of Black Bush Polder as the ultimate goal is to have life in the village return to some level of normalcy as soon as possible,” Mr. Flatts said.