Effective governance of Caribbean cricket has long been an issue under the radar of Caricom leaders. Caricom Chairman, Prime Minister of Dominica, Roosevelt Skerrit at a press conference held at the end of the 37th Regular Meeting of the Conference of Caricom Heads last evening, told media operatives that, having discussed cricket, a new Prime Ministerial sub-committee will be created.

“There were two before; one on governance issues and one of the larger issues confronting cricket…this is a new committee on cricket mandated to examine all matters relating to the development of cricket which is a very wide area of concentration,” Prime Minister Skerrit said. 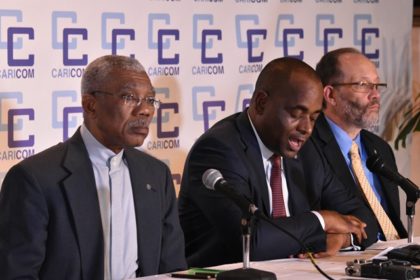 In March, Grenada’s Prime Minister Keith Mitchell threatened to step down as Chairman of Caricom’s sub-committee on cricket governance, after being at the forefront of spearheading efforts to affect the restructuring of the West Indies Cricket Board.  He also endorsed the 2015 Barriteau Report provision which recommended the immediate dissolution of the WICB.

At the 27th Inter-Sessional Conference of Heads of Government of the Caribbean held in Belize earlier in the year, leaders discussed the problems facing West Indies cricket, which include governance. At that meeting leaders signalled their intention to approach the International Cricket Council.

Barbados’ Prime Minister, Freundel Stuart then stated that Heads of Government had to intervene to protect the interests of the people in the region, in the face of a stand-off between the WICB and Caricom Heads of Government. The stand-off was over the state of West Indies cricket and the issue of cricket governance.

During that summit, leaders also examined recommendations coming out of a report by a special cricket review panel chaired by Professor and Pro Vice Chancellor of the University of the West Indies, Dr Eudine Barriteau.

A Final report of the Review Panel on the Governance of Cricket which was issued in April last indicated that West Indies cricket had failed to evolve in a manner which accords with the exigencies of the modern game. The report also added that cricket continues to be governed by a structure that is not reflective of the transformation of the game elsewhere.

“This is especially evident in relation to the requirements of the player-coaching community, stakeholder investors, and the expectations of the Caribbean cricketing public.  The existing governance structure, in its most essential features, remains closely aligned to its origins in the early 20th century when it was established to coordinate inter-colonial tournaments, select West Indian XIs and touring teams, than with the modern governance, administration and ongoing commercial progress of the industry of cricket in other parts of the world,” the report stated.