―You can grow to be who you want to be. PM Nagamootoo

Happiness is perhaps an understatement when describing the faces of both students and teachers of the Sand Hills Primary School on Thursday afternoon when the Prime Minister Hon. Moses Nagamootoo commissioned their newly constructed school.

At a cost of approximately $19.2 Million (US $92.000.00), First Bauxite LLC and its subsidiary Guyana Industrial Mineral Incorporated (GINMIN), constructed the new school for the community, as part of its capital project.

Located just opposite the old school building, the new open auditorium-style education facility has been constructed with a high ceiling. It has two smaller rooms to its rear, acoustic doors and has been outfitted with Florescent lights and wide sliding windows on both sides.

The new school represents a more modern space conducive for learning, according to Prime Minister Nagamootoo.

“Today I am very proud as a country boy to come to Sand Hills knowing that you have a modern school,” Prime Minister Nagamootoo sated

Prime Minister Moses Nagamootoo addressing students, teachers and guests during the commissioning of the Sand Hills Primary School on Thursday 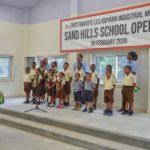 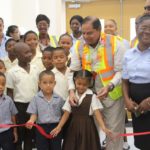 Recounting much of his school days in Port Mourant, East Berbice/Corentyne with his brother, who was just a year older than him, the Prime Minister said at that time they could not dream of a school with fans, much less air-conditioned, neither dreamed of schools with lights. He said the sun was their natural bulbs and that they often studied with candles and hand lamps, and that they did not know what a library was.

“To borrow a book, I travelled three miles, even to borrow a comic book you walked for three miles to go to the next community. Today you young people are very privileged to have a company coming into your community to do business and realise the importance of you getting a modern education, starting with a modern brand-new building.”

He said these were the types of companies’ government preferred working with to produce an educated nation.

“If you children use this building properly, the books, the education, the teaching here, you are going to learn and like this Prime Minister, you can grow to become whomever you want to be in Guyana, in the world,” He encouraged the students.

The Sand Hills Primary School has a population of 15 students, Nursery and Primary at this time.

Thus far, First Bauxite LLC and GINMIN have constructed a playground for the school and a passenger boat to ferry children to and from school. They also support the  Sand Hills Community Public Library and sponsor a Geology/Mine Engineering scholarship at the University of Guyana.

The company offers scholarships to students making the transition from Primary to Secondary School and then University.