No ‘double dipping’-Minister Lawrence -Pensioners must be living in Guyana

The Ministry of Social Protection will be putting measures in place to ensure Guyanese who live in other countries do not access a Guyanese pension. This information wa

s related to the Government Information Agency (GINA) in a recent interview with Minister of Social Protection, Volda Lawrence.

Minister Lawrence described it as ‘double dipping’ when persons not living in Guyana, access pension from both the Guyanese government and the country in which they live.

“We will be putting an end to persons who are ‘double dipping’…we have persons who believe that it is their right to live in a foreign country and collect their pensions here…we are saying no, it is not going to happen,” Minister Lawrence said. 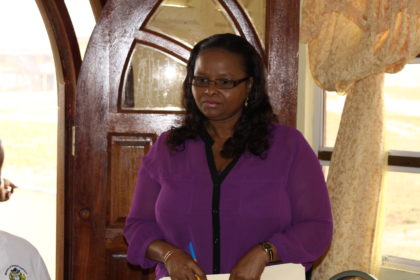 She added that last year, this issue was brought to the attention of the staff of the ministry who were advised they will be held responsible and surcharged where books are issued with them knowing the persons do not live in Guyana.

Persons desirous of accessing old age pension will have to be living in Guyana for a minimum of two years.

“In the hinterland regions we know there are persons with more than on identification card who draw (collect) pension under one name in one region then travel to the next and draw under the other name,” Minister Lawrence explained.

“To address this, guardians will have to submit an attendance report for the child so that they can continue accessing such assistance,” Minister Lawrence explained.

Additionally, the Ministry will be digitalising the pension system to make it more efficient in identifying redundancies in the system. The digitised database will also indicate to the ministry persons who are authorising others to collect their pensions, which is an indication that they are not in Guyana.

The digitalising of the pension database will also see greater accountability within the pension system, and probation officers will have more time do additional field work and conduct visitations.

The Social Protection Ministry has engaged the Ministry of Public Telecommunications to ensure that the two agencies can collectively run a pilot of this electronic project.