No security threats expected for elections

―no legal challenges expected after results

Prime Ministerial Candidate for the A Partnership for National Unity and Alliance for Change (APNU+AFC) Coalition and Minister of Security, Hon. Khemraj Ramjattan is confident that elections will proceed peacefully with no hiccups or security threats.

While outside of his polling station, Rama Krishna Primary School in Georgetown, Minister Ramjattan told members of the media that in the “event of a hiccup occurring” the Commissioner of Police and the Guyana Police Force are prepared to take charge. 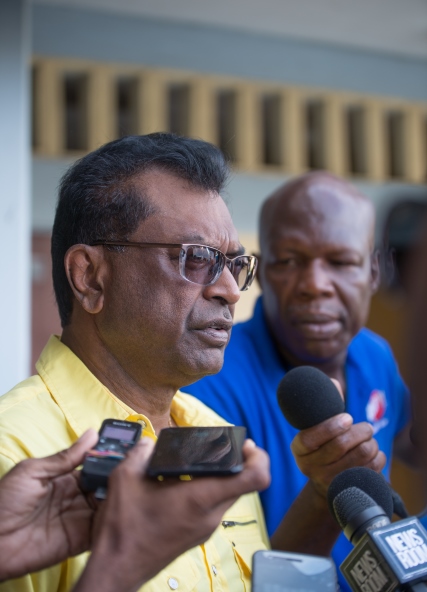 “The Commissioner has given me the commitment that everything will be taken care of and I don’t think that there is going to be any security problems today […] but assuming there is, I am certain that the Commissioner and his men are going to take care of it, ” Minister Ramjattan said.

“People appreciate the fact now that it must be peaceful. And that the political will of the people is going to be heard,” he added.

The Minister said polling agents for the parties have also reported positive feedback and that all is in order.

Concerning claims made by some media entities and politicians about the Government denying persons their right to vote by closing the ‘backtrack’ entry from Suriname to Guyana, the Minister said the claim is far from factual and a ploy by desperate individuals.

“Many countries are making certain prohibitory orders in relation to entry into the country with regards to the Coronavirus and that is what we’re doing. The minute you don’t do that they are going to say that you are not taking care of your health situation.”

The Public Security Minister said this monitoring will continue even after elections.

As it relates to the voting process, he reported that it went smoothly and based on turnout at rallies and meetings, he is expecting a high voter turnout and is confident that the Coalition’s progress will not be stopped.

Moreover, he said that when results are tallied and released, he expects no legal challenges, and is confident in the Guyana Elections Commission (GECOM), Chairperson, Retired Justice Claudette Singh.

“At the end of the day, it comes down to the count and since we have an independent Chairperson there and she knows what she’s doing.”