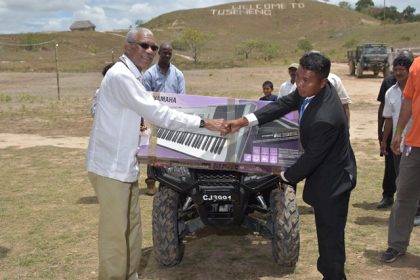 The ATV will be used to facilitate the day to day activities of the Community Development Officer (CDO) serving that area, while the musical instruments were given to the Tuseneng Cultural group.

The vehicle is part of the government’ efforts to equip CDO’s to carry out their duties and ensure they are in constant contact with the residents of their respective communities; thereby reducing the number of complaints and concerns when officials visit the villages.

CDOs are deployed in the various sub-regions of Regions One (Barima-Waini), Seven, (Cuyuni-Mazaruni), Eight (Potaro-Siparuni) and Nine (Upper Takutu-Upper Essequibo) to monitor all village activities and projects.

Meanwhile, the president also distributed sports gears and kites to the youths of Tuseneng.