─Govt WiFi up and running

─Persons trained to maximize use of technology

Electronic tablets have been presented to several core groups in Fairview, Surama, Apoteri, Rewa, Rupertee among other North Rupununi villages. This move will allow residents to make use of the free government WiFi which has been established in these villages.

The devices were presented to women’s, youth, sport, wildlife and culture groups. The Nursery and/or Primary Schools in each of these villages also received tablets while the village leaders also received a device. 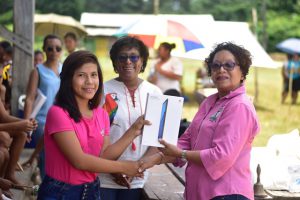 Minister within the Ministry of Indigenous Peoples’ Affairs Garrido Lowe, along with Minister of Public Telecommunications Catherine Hughes, hands over a tablet to a representative of the sports group at Fairview 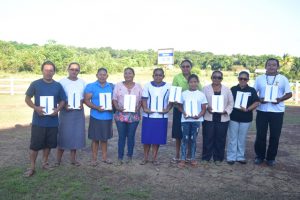 Some residents of Surama who received tablets

Over three days (September 25-27), Minister of Public Telecommunications, Hon. Catherine Hughes accompanied by Minister within the Ministry of Indigenous Peoples’ Affairs, Hon. Valerie Garrido Lowe visited the communities to hand out the devices and inform the residents of how the use of these electronic devices can be maximized.

The Telecommunications Minister noted that this is just the beginning as there are major plans in store for ICT in the hinterland that will positively impact major sectors such as health, education, tourism and business in these communities. “Young people especially know how to use this technology and that is what we will build on…” Minister Hughes said.

Minister Valerie Garrido Lowe encouraged residents to utilise the internet for the marketing of local products and promoting their village as a tourism destination among other things.

Training in the operation of the devices, creation and management of web pages and the utilisation of software for businesses and other purposes were held for several residents in the villages.

Toshao of Fairview, Martin Carter who benefitted from training at an initial workshop, welcomed the establishment of the internet service and all the benefits that will accrue. Martin said he is prepared to work with fellow trainees to ensure others in his village especially the older residents are familiarised with the tablets and other ICT devices

“The internet is something new especially to the older folks…. we have the women’s group that does sewing and now they can check online for new designs to do that… for the school children, they can do their research for homework. Before we utilise the service at Iwokrama but now we won’t have to do that.”

The establishment of ICT hubs all across the country is all part of the continued effort to ensure the communities in the hinterland and on the coast are connected.