Under the purview of the Ministry of the Presidency, the Office of Climate Change (OCC) on Wednesday officially hosted the closing workshop for its project, “Transitioning to National Energy Security (TNES): Bartica as a Model Green Town”, at the Cara Lodge.

Head of OCC, Janelle Christian thanked all relevant stakeholders involved in the first component of the TNES Project. Christian said moving forward she is hopeful that such involvement continues for the development of the envisioned model green town since this will also ensure the future of the country as the government seeks to embrace the Green State Agenda. 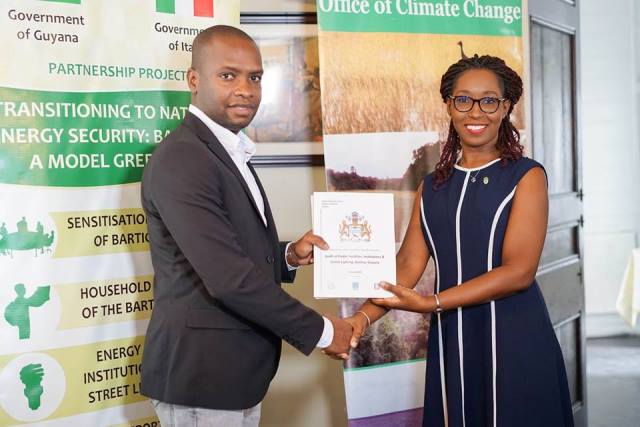 Head, Office of Climate Change (OCC), Janelle Christian hands over of the reports to Mayor of Bartica, Gifford Marshall.

Head of the DoE, Mark Bynoe. 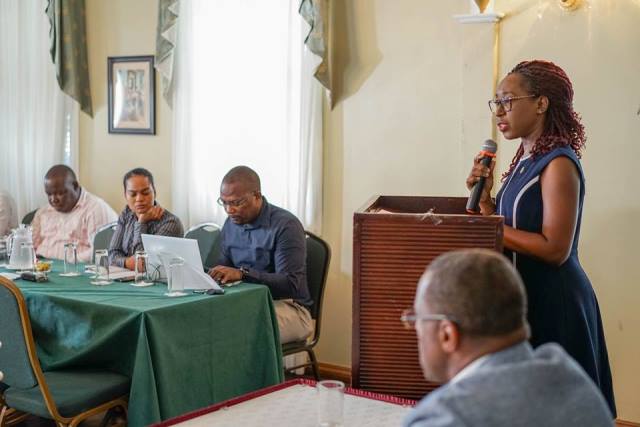 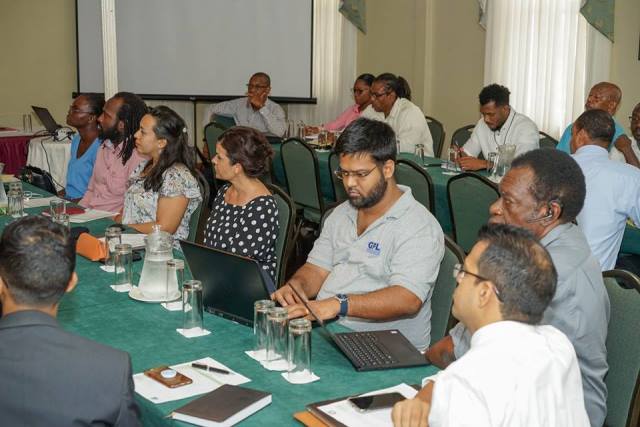 A section of the technical personnel and other experts involved in the first phase of the project.

“We are indeed happy that we are at this point where we now have the results, recommendations coming out of the studies… this is necessary for us to have informed decision-making. While we may have our own ideas of what can work or cannot work…because of the cost associated with these types of investments we have to be sure how we invest our state’s resources,” Christian said.

Head of the Department of Energy Dr. Mark Bynoe explained that though Phase One of the project is completed, it is but one of its many components.

“Any good plan must be nested on sound information and data…what Phase one sought to do is to establish certain benchmarks and collect baseline information that will help us to transition into Phase Two,” Bynoe said.

According to the DoE Head, Phase Two costing approximately $670,000 which has already been secured, will see the actualization of these studies into concrete action.

Bynoe also confirmed that the project does include a Phase Three which is advanced and will see the country benefitting from a US$3M grant with a 40-year moratorium at a zero per cent interest rate. Bynoe emphasised that attached to this grant is the condition that Guyana must pursue sustainable and cost recoverable initiatives.

He added the plan is to mirror the programme which has been initiated by the Small Business Bureau since this will allow government agencies as well as households and small businesses to transform to renewable energy.

Mayor of Bartica, Gifford Marshall said he is proud of the project’s achievements more so the fact that the town is leading the way in becoming the model green town. He noted, while most expected the objectives of the project to be completed, thus far, planning takes time for proper implementation of this vision.

“This project, in particular, the municipality and the people of Bartica would have learnt three things so far… vision is almost never 2020 but it takes courage, strong leadership and dedication… today Bartica is in a better place and the TNES project represents for Bartica a start mark, it speaks to empowerment, energy and efficient planning,” Mayor Marshall said.

The objective of the project is to gather and compile data on energy use in Bartica, which will be used to inform evidence-based decision making for the future implementation of projects and programmes. In June 2017, Phase one of the TNES Project at a cost of US $650,000 was launched.

It saw the implementation of a Household Socio-Economic and Energy Use Baseline Survey, an audit of public facilities and institutions and street lighting. This included energy audit of the transport sector, production of content manual and public awareness and Education Campaigns and Website Development.

As of December 15, 2018, the consultancies initiated under the TNES were concluded and the results and recommendations of the various reports will be presented to key stakeholders.