Guyana’s new oil-producing status and its upcoming 4th round of mutual evaluation in 2023 will be the highlight of a three-day National Risk Assessment (NRA) workshop underway at the Marriot Hotel.

The World Bank is hosting the money laundering and terrorism financing workshop, which follows an earlier one, and will lay the foundation for the mitigation of financial crimes here.

Attorney General (AG) and Minister of Legal Affairs, Hon. Basil Williams SC, said the complexity and scope of financial crimes evolve as new technologies, products and sectors emerge. According to him, the risks are not static. 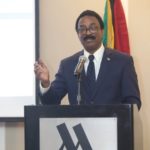 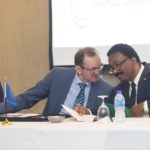 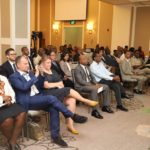 “Embarking on a second NRA is timely for Guyana as we are now an oil-producing nation. This new sector will change our financial landscape [and in fact] the landscape has already been changed. For instance, there has been an increase in business and investment and our economy is continually growing,” the AG said at the opening ceremony Wednesday morning.

While the development is positive for Guyana, all must be vigilant as a growing economy can also bring additional financial risks.

Guyana has been diligent in its stand against money laundering and other financial crimes and has been successfully meeting its international obligations in this fight.

During its fourth mutual evaluation in 2023 by the Caribbean Financial Action Task Force (CFATF), Guyana, in addition to having its laws and institution in place, will have to demonstrate that it is effective in mitigating money laundering, terrorism financing and the proliferation financing risks.

The NRA meeting will allow Guyana to assess the implementation measures taken by key stakeholders to address deficiencies identified by the first NRA.

Apart from the oil and gas sector, the workshop will also look at money laundering and terrorist financing risks associated with proliferation financing, illegal wildlife trade, and virtual assets.

“By addressing these new features Guyana will be taking a proactive approach in the protecting of frontiers from criminal elements,” the AG stated.

World Bank representative Klaudijo Stroligo said the stand against financial terrorism required the involvement of all and countries needed to be true to themselves if they were to weed out the issue.

Minister of Public Security, Hon. Khemraj Ramjattan and members of the diplomatic community were also present at the opening ceremony.