Region 10 Government Representative in the National Assembly, Jermaine Figueira described the presentation of Opposition Members of Parliament (MPs) during the debate on Budget 2017, as devoid of substance.

He said that the views expressed by Opposition MP, Irfaan Ali are bluff, MP Joseph Hamilton’s was “bad” and MP, Dr. Frank Anthony’s was a VAT on the truth. The kinks in the economy, the young MP said were a reflection of the parallel economy that obtained under the previous Government. 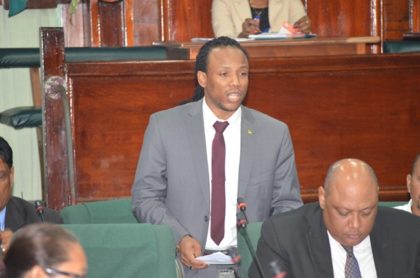 “We need an opposition that is coherent in its views,” Figueira said. He noted that despite their calls to pay public servants and the military more than the previous Government ever paid, “This Budget is one that is indigenous to the needs of this country,” he added; as he highlighted the increases paid to all since the Coalition Government took office. He noted that in addition to the “substantial increases” the tax threshold was raised as was the minimum wage. He pointed out that the attitudinal metamorphosis was astounding given all that the previous Government promised, but failed to do.

The MP cited the National Youth Policy which he said answered a call which many see as one which will do “a giant favour to our youths”.

He commended the work done by Minister of Public Infrastructure David Patterson as an example of the “developmental drive” which will continue under the Government. He also listed the various efforts to improve health delivery and educational facilities in Region 10. Figueira also praised the Ministry of Social Cohesion for efforts to forge unity, and assist in the transportation of school children in communities across the country.

In closing, he noted that despite not obtaining all that Region 10 requested, far more was done for the Region by the Finance Minister in his 18 months in office, than the PPP/C ever did during its 23 years in office.

Following MP Figueira was Opposition MP Cornel Damon. He described as “loquacious” the preceding presentations. He said that Guyana is “infested with poor people” and the Budget lacked consultation. He called on all Guyanese to reject what he termed as a “death sentence Budget” as citizens were not going back to the past. He also stated that only a “chosen few” would benefit from the Budget measures. The fact that three Budgets were presented in 18 months should not be praiseworthy, he said.

MP Damon also decried the moves to diversify the sugar sector, saying with more than 200,000 people involved in the industry, more should be done to save it. He also sought to request the removal of Minister Simona Broomes from the (Ministry of Natural Resources) since she was in a clear conflict of interest situation He then took umbrage with the actions of Public Health Minister, Dr. George Norton over the recent storage bond issue, and Minister of State Joseph Harmon whom he said passed the dirty end of the stables to Minister of Education, Dr. Rupert Roopnaraine with regards the funds for the D’Urban Park.

The Opposition MP who hails from Essequibo, further called for relief for Region Two rice farmers, better opportunities for school leavers and better health care facilities at the Suddie Hospital, in particular.