The President was at the time addressing attendees at a farewell reception for Ms. Musa, held at the Pegasus Hotel.

“Ms. Musa presented her credentials to the Minister of Foreign Affairs in February 2012. She came not as a novice but as a hard-headed, though not hard-hearted, veteran of complex situations in over 20 countries. Her work in Africa, especially in Egypt, Ethiopia, Liberia, Tanzania and Uganda, in Asia, during the South East Asia tsunami catastrophe, in Afghanistan, in the Middle East and in Europe more than adequately prepared her for the final [and] fulfilling assignment here in Georgetown. Guyana has benefited from her more than 25 years of experience as an international public servant in the United Nations system. We thank her for superintending the delivery of tangible benefits to the Guyanese people,” President Granger said.

Guyana acknowledges the wide-ranging support and assistance provided during the ‘Musa quadrennium’, he said, noting that there was no area of governmental activity to which she did not lend her energy, expertise and experience.

“Her portfolio ranged from Amerindian land-titling, to climate change, democratic governance, the environment, inter-faith harmony, information and communication technology, the media, occupational health and safety, poverty reduction, public health, social cohesion, social protection, solid waste management and much more. The UNDP, during this period, played an active role in strengthening public trust in our institutions and in our capacity to deliver the good life.  The Resident Coordinator has been at the front, centre and behind all of these projects. Guyana will remember Ms. Musa with respect and gratitude. We wish her a happy continuation of service. We look forward to seeing her back in Guyana in some other helpful capacity,” the President said.

Meanwhile, in her address, Ms. Musa said that Guyana has great potential and a great future. The outgoing diplomat said that Guyana has rich mineral resources and a diverse heritage, which, with good governance, can see the country taking off on an upward trajectory, thereby providing every Guyanese with a good life. 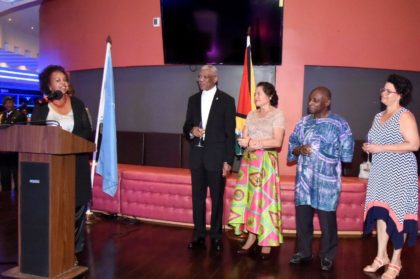 Outgoing United Nations Representative in Guyana, Ms. Khadija Musa makes a point to President David Granger, during her brief remarks, last evening, at the farewell reception held in her honour at the Pegasus Hotel

“…when I read the newspapers and I read that a lot of young Guyanese are graduating and heading north, I think they are misled and there is much greater potential here. So I think it is important to learn how these young Guyanese, who are flying north, can be enticed to stay and be a part of the future of this country. I think there is huge potential here and I can see that. Every morning I got up and I thought about the potential of this country, it made me work harder and harder to at least help in our small way as a UN team, to contribute to improvement and going forward….” she said.

Supporting President Granger’s push for a unified nation with the establishment of a Ministry of Social Cohesion and and a well articulated policy direction, Ms. Musa called on the nation to live in solidarity.  She noted that while there are differences, cultural and otherwise, these should not cause separation or discrimination but rather, must foster camaraderie.

“I wait also for the day when Guyanese are united; become one and start thinking as Guyanese. I know cultural differences are important but those are cultural and one can enjoy them and admire them and still live together or visit each other, but everyone should pitch in and enjoy it as a country and not let it divide you. Think to be Guyanese first then enjoy your cultures, whether it is Afro-Guyanese, Indo- Guyanese or Portuguese Guyanese. It is really important to be one. Don’t let politicians divide. If you do that, you will not grow. I think you have a wonderful, wonderful country and you have great resources so demand good governance,” she said.

The UN envoy also commended the Government on development efforts and called on Guyanese to work together for good of country.

“I see really genuine efforts to develop the country. I see very genuine planning and I think that it is really very important to support this process and provide the support for the Government to succeed. Human beings always have their doubts but let the process be and you may be surprised and you may do extremely well,” she said.