Georgetown, Guyana – (January 5, 2017) The Government of Guyana, today, came in for high praise when 135 residents of the community of Mocha/Arcadia, East Bank Demerara (EBD) received their ‘Permission to Occupy State Lands’ documents from Minister of State, Mr. Joseph Harmon at a simple ceremony held at the Marks Supermarket.  The document, which is temporary and valid for three months, offers the residents the option of taking up a 50-year lease on the lands for a nominal fee. Once the fee is paid and the administrative procedures completed, the residents would be allowed to live and farm on the one acre plots of land.

Minister of State, Mr. Joseph Harmon (centre) flanked by Chairperson of the Board of Directors of the Guyana Lands and Surveys Commission (GL&SC), Ms. Paulette Henry (left), Regional Chairperson, Demerara-Mahaica, Ms. Genevieve Allen (right), Chief Executive Officer of the GL&SC, Mr. Trevor Benn and some of the beneficiaries.

The residents, who have been occupying the land for up to 25 years, are only now receiving any form of legal documentation. Addressing the beneficiaries and residents from the area, Minister Harmon said that during the course of 2016, the residents sent several letters to his office and that of the President, detailing their plight, noting that under the former administration, they had been denied documentation for the land on which they had been doing agricultural work.

Describing the occasion as a ‘new beginning’ for the community Minister Harmon told the residents that they must now use the land to return to the days of self-sufficiency, especially in the agricultural sector.

“The granting of these ‘Permission to Occupy’ [documents]…is a correction of what I would call a historical injustice that denied the residents of Mocha Arcadia use of its surrounding agricultural lands and by extension the community, the opportunity to develop the village economy and create employment especially for its young people. It is hoped that you the recipients would put the land to full, productive use and bring about a rebirth of the enterprising spirit in your community,” Minister Harmon said.

The Minister of State told the residents that the initiatives, which are undertaken, should be done in an eco-friendly manner and in keeping with the Government’s push for a ‘green’ economy. He further noted that the documents should be used to chart a new course by ensuring that the village’s great potential for agro-enterprises and self-sufficiency are again at the centre of the nation’s development.

“Agriculture is nothing new to this community. This ceremony today, therefore, represents a new beginning for this community and the

Minister Harmon presents one of the ‘Permission to Occupy State Lands’ document to this gentleman from the community.

return to its rightful place as an agricultural community. However, it is a return with a difference, with a different set of circumstances since the advent of the APNU/AFC administration. Your Government has committed itself to returning villages to economic viability and sustainability. Mocha Arcadia is a good example of a traditional Guyanese village and had it been given the necessary support, would today, I am quite sure, would have been a viable and prosperous community,” Minister Harmon said.

Commissioner of the GL&SC, Mr. Trevor Benn detailed the lead up to what he called, ‘the historical day’. He said that his desk had become inundated with letters from members of the community of Mocha complaining about their inability to access titles for their lands and the length of time many of them had been applying.

“In June 2016, a team from the GL&SC came to the village and commenced the land regularisation. On that first occasion in June, we had approximately 300 persons showing up and that triggered what we called a claims and objections period, which allowed people who were occupying land to make a claim. The process ended in November and it resulted in 135 persons being considered,” he said.

Some of the beneficiaries of the ‘Permission to Occupy State Lands’ document from the Mocha/ Arcadia community.

Mr. Benn also said that Mocha has, over the years, become a model farming community and the decision was taken by the Commission to give an acre of land each’ which is enough to allow them to live and at a minimum, maintain a garden.

“These lots are not the usual lots you would get from the Central Housing and Planning Authority (CH&PA). These are one acre lots. This would allow you to do your farming and live on the land.  We are doing it because we recognise the hardships that people in the community face for many years and could not properly utilise their lands and make a living from it over the years. We have given it at a minimal fee for the prospective leaseholders. Anyone who receives the permissions today will be required to pay a minuscule amount,” Mr. Benn told the residents.

Meanwhile, Chairman of the Mocha/Arcadia Neighbourhood Democratic Council (NDC), Mr. Rudolph Adams, in an invited comment, expressed gratitude to the Government for the initiative, noting that it has always been a dream of the community to receive documentation for the lands they have occupied for over two decades. The lands, he said, will now be used to drive self-sufficiency in the village.

“I must say how appreciated we feel for this venture in allotting these leases to the residents of Mocha Arcadia. I think this is long overdue 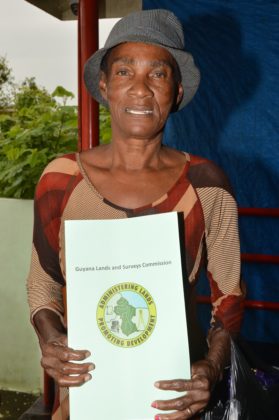 Mrs. Paula Benjamin poses with her ‘Permission to Occupy State Lands’ document, which she received today from Minister of State, Mr. Joseph Harmon.

and this would take us a very far way in our economic drive towards self-independence; self-independence as promoted by our Excellency, President David Granger to provide entrepreneurial skills to persons within our community and I think that this is the beginning of much more to come. We are very appreciative in seeing some of the dreams of ours for our community being realised,” he said.

One resident, who only gave his name as Mr. Mahase, said that he has been living in the area for over 25 years and it is indeed a great feeling to have finally received his Permission from the Government, just after about one year of seeking intervention.

“I am happy. With the previous government, they wanted to throw us off the land and put us out and all of that but now we can do work on our land. So many years we had the land but couldn’t do anything on it because we didn’t have paper so we are happy to get this so that we can go back and do work on our lands,” he said.

Minister of State, Mr. Joseph Harmon, addressing the residents and beneficiaries, earlier today, at the Marks Supermarket in Mocha/Arcadia where the presentation took place.