Over $1BILLION for community development and operations of LDOs

More than $1Billion has been allocated as fiscal transfers, in the 2019 budgetary estimates, to support community development works and the operations of the Local Democratic Organs (LDOs), according to Minister of Finance, Winston Jordan. 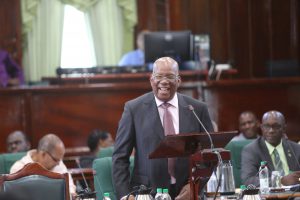 Minister of Finance, Winston Jordan, during his presentation of the 2019 Budget in the National Assembly

During Minister’s Jordan’s presentation of the 2019 Budget in the National Assembly he said the government will also invest $320Million to conduct mass property valuations over an 18-month period between October 2018 and the first quarter of 2020. Upon completion, the respective LDOs will undertake to update their valuation registers pending their determination and action.

“This will mark the first national valuation of properties in decades and will allow the LDOs to improve their revenue base, which will allow them to more effectively serve their communities and provide public services such as roads, street lights, drains and garbage disposal,” the minister explained.

Additionally, four Plans of Action for Municipal Development (PAMD) are set to be undertaken next year, to complement the existing nine PAMDs.

He noted that, while Regions 9 and 10 have completed their Plans of Action for Regional Development (PARD), Region 6, is on stream to commence as well.

“However, we must note that these strategic plans are just documents; each RDC and municipal council must take ownership and lead the transformation of their respective areas. Implementation plans must be developed and priced, resource mobilisation must be undertaken and continued performance monitoring must occur to verify that each LDO is achieving the desired positive impact on the lives of their citizens,” the minister said.