Georgetown, Guyana – (August 16, 2016) A young woman, who was given a fresh start in life when she received amnesty under President David Granger’s policy of giving second chances to non-violent, non-cocaine offenders, was able to completely turn her life around and is now a proud owner of a thriving poultry rearing business as a result of the Government of Guyana’s Sustainable Livelihood and Entrepreneurship Development (SLED) programme. 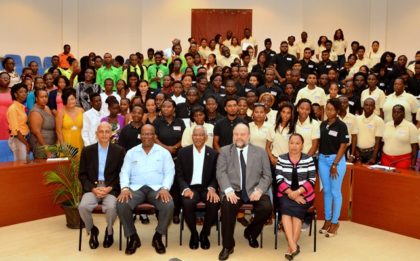 Ms. Tiffany Peters was initially received basic employability skills through the United States Embassy’s Skills and Knowledge for Youth Employment (SKYE) and subsequently enrolled in SLED programme where she subsequently received a $200,000 grant to start up her own business.  Describing the pride and challenges that come with having her own business, Ms. Peters said that she has already been able to make a profit and is looking to building on that success.

Ms. Peters is just one of about 160 youths from rural communities in Regions Three, Four, Five , Six and Ten, who graduated from the programme, earlier today, at the Arthur Chung Convention Centre. The youths received training in information technology and entrepreneurial and life skills after which they were counselled and guided by trained coaches to establish their own businesses, seek employment or further their studies. 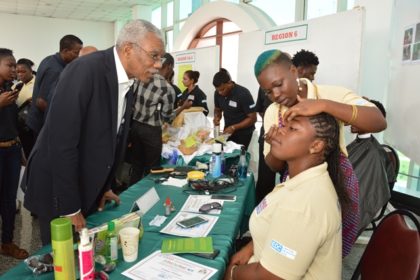 Another participant, Mr. Akeem Williams, who also benefited from the SKYE project, said that he was unemployed and jumped at the opportunity to become his own boss and initially started out with apiculture (beekeeping) to much success.  “Over the past few months my business has grown and I was able to add new products, namely, peppermint oil, crabwood oil and coconut oil… I therefore thank the US SKYE programme and more so the Government of Guyana for helping me to become self-employed and giving me a bright future,” Williams said.

The SLED initiative, which is being implemented through the Ministry of Communities, is designed to provide support for the expansion of the local economy in communities across Guyana and assist micro, small and medium-scale enterprises and is part of President Granger’s two pronged approach to stimulating youth employment.

President David Granger, who delivered the feature address, said that the SLED graduation ceremony, pointed out that the programme is evidence that contradicts criticisms of his Government’s approach to tackling the endemic problem of youth unemployment.  The Head of State noted that the solution to the problem must focus on first, education and second, entrepreneurship. 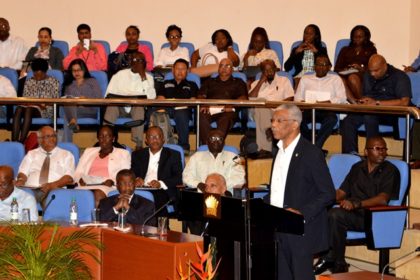 He explained that only 2,380 or 28.3 percent of the 8,430 public school students, who wrote the Caribbean Secondary Education Council (CSEC) examinations in 2015 secured passes in five or more subjects, including Mathematics and English and are therefore unemployable in many instances. He reminded that the unemployment rate in Guyana rose significantly in 2000 when the Guyana National Service was dissolved and said that his Government has embarked on a comprehensive strategy to prepare youths for the world of work.

The President reaffirmed his Administration’s commitment to generating employment in the economy and to create the conditions necessary to boost entrepreneurship, particularly among the youth demographic.  “The SLED Initiative is part of a programme that reinforces the administration’s efforts to stimulate economic development in communities, especially at the grass root level. It has provided training, mentorship, business development skills and start-up grants to individuals and groups,” he said.

Since the Government took Office, a number of bold initiatives have been taken to drive small business development in the 10 regions. This includes the launch of the Linden Enterprise Network (LEN) programme and the Hinterland Employment Youth Service (HEYS). The President said entrepreneurship will stimulate employment in industries, including agro-processing and micro-industries in rural and hinterland communities. 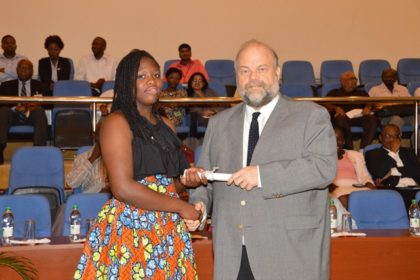 “The SLED, HEYS and LEN initiatives are all part of that the administration’s grand youth employment strategy. That strategy stands on a bipod of education and entrepreneurship… These initiatives have all made small but smart starts to overcoming the problem of unemployment. Their impact on employment and enterprise generation has resulted in business start-ups, provided support to several groups and will set the stage to be into all ten administrative regions,” the Head of State said.

He added that all of these initiatives are about the future and called on youths to fully capitalise the opportunities that are emerging. “No one can doubt the government’s commitment to ensuring ‘a good life for all’ through education, employment and enterprise,” he said.

Meanwhile, Minister of Communities, Mr. Ronald Bulkan in his remarks said that when President Granger, while he was Opposition Leader, expressed serious concerns about the high rate of joblessness among youths, a matter on which he even penned a booklet entitled “Young people, the forgotten majority.”

“Today’s batch of beneficiaries and entrepreneurs are among the first to take advantage of this helping hand offered by the Government…our young people have a champion in this Administration and his name is David Granger,” the Minister said.

Through the SLED initiative, 99 youths, who were trained under the SKYE programme received start up financing for their businesses to the tune of $22.2M. Additionally, several groups benefitted from the SLED programme. These include: the Guyana Mangrove Reserve Producers Coop Society-$6.9M; United Natural Resources and Agriculture Producers-$13.5M; Women for Change-$3.4M; Plaisance/Sparendaam/Goedverwagting Development Association- $4.9M and For the Children’s Sake Foundation- $5.9M. Additionally, the project has been expanded to cater for youths in areas such as Bartica and Jawalla in Region Seven, Mabaruma in Region One and Shulinab, Region Nine.

Minister Bulkan disclosed that the total amount of money disbursed to these groups is approximately $76.5M with individual grants ranging between $3M and $20M. He added that in the medium term this investment will create about 200 jobs. 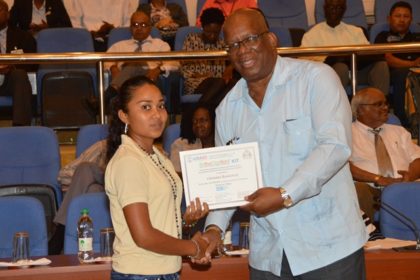 United States Ambassador to Guyana, Mr. Perry Holloway said that the lives transformed under this programme cannot be understated and said that the Government’s efforts will magnify what was started under the SKYE initiative.

“I am encouraged and impressed by the Government’s commitment to and investment in its youths… When partners support, adopt and use approaches that have proven to be successful, it increases the effectiveness of development work,” the Ambassador said.