“Past 5 years GDF has regularised, reorganised and recapitalised” -President Granger

Commander-in-Chief of the Armed Forces President David Granger says that the force’s capabilities will be enhanced as the nation embarks on the ‘Decade of Development.’

He made these remarks while addressing senior ranks and others at the Annual Guyana Defense Force (GDF) Officers’ conference. 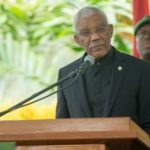 President and Commander in Chief David Granger and officers at the Annual GDF Officers’ Conference. 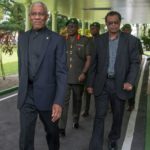 Honor Guard of Coast Guard ranks at State House prior to the opening of the Annual GDF Officers’ Conference.

President Granger described the GDF as the guardian of the country’s national patrimony, which is integral to its economic development.

“…economic security is essential to national development. The people of this country can benefit from its bountiful resources only if they are protected. Officers’ Conference 2020 should, therefore, consider the Defence Force’s role in strengthening border and maritime defence and in ensuring the economic development of our beloved country.”

The Head of State added, “The Defence Force has effected organisational change in order to better identify and deter threats to territorial integrity and the national patrimony… The past five years have witnessed the Force’s regularisation, reorganisation and recapitalisation. The Defence Force today is fit for its role.”

According to the President, the promulgation of a defence doctrine, the strengthening of the technical corps, the pursuit of defence cooperation with friendly countries and the implementation and organisational restructuring have improved the Force’s readiness to respond to threats.

He noted that the GDF’s overarching defence policy implies that all the elements of national power – diplomatic, economic, military, political, social and technological – will be employed to reinforce defence and promote economic development.

Improvements in the “technical corps”, the Air, Engineer and Signal Corps, and Coast Guard, enhanced the Force’s agility and capability.

The Commander-in-Chief explained that in the Decade of Development, the GDF’s capability will be enhanced.

“The Decade of Development will incorporate policies to better equip the Defence Force to protect our country’s natural resources, on land and at sea.  The Defence Force, today, is a superior organization to what it was five years ago. Public confidence in its capabilities has been restored. National defence, as a consequence, has improved. These improvements will continue over the next ten years.”