Phase one of Mazaruni Prison expansion set for October completion

– Phase two already commenced; to be completed next year

Phase One of the massive expansion of the Mazaruni Prison is set to be completed by October of this year. This was disclosed by Iain Peebles, Project Manager of the Trinidadian firm Kee-Chanona that has joint responsibility for the project alongside, the Guyanese company Nabi Construction Incorporated.

Today, Minister of Public Security, Khemraj Ramjattan who is performing the duties of Prime Minister, conducted a site visit to assess works completed so far. The $4B expansion will hold 400 prisoners to help with the overcrowding at the other prisons across the country. 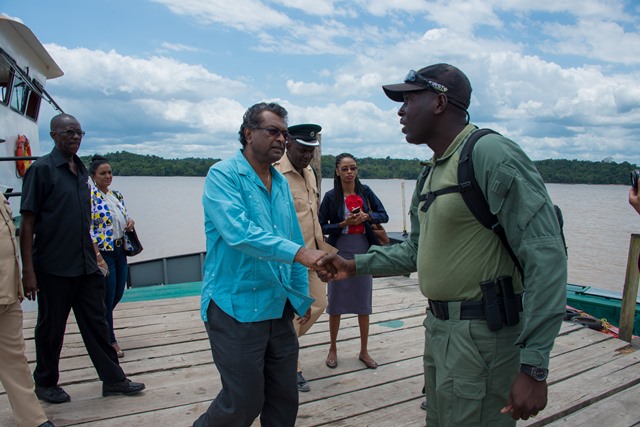 Minister of Public Security, Khemraj Ramjattan is greeted by Senior Superintendent of the Mazaruni Prison, Kevin Pilgrim on arrival at Mazaruni. 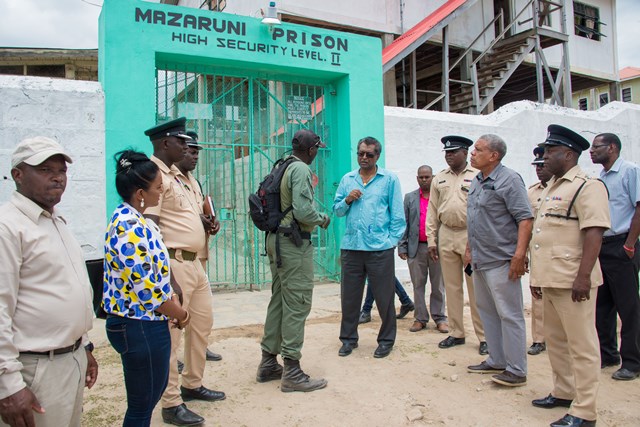 Peebles said with the construction of the first floor completed, Phase One is about 40 per cent completed. When finished there will be a U-shaped, two-storied building that will house cells, offices and a courtyard for the prisoners.

Phase Two of the project commenced about a month ago with foundational works being carried out. The result will be a square-shaped building that will house offices, training centres and accommodation for the prisoners. Peebles said that everything is going to plan and that there is no need for any variation to the project. A road will also be constructed to link the two prisons.

Minister Ramjattan expressed his satisfaction at the pace in which the works are being carried out as there is a need for more space to accommodate prisoners. He said the two fires in 2016 and 2017 respectively, placed a strain on the other prisons.

“That is why we have to get the prison estate in Mazaruni up and going and that is happening. I want to commend the contractors, the engineers and the consultants for ensuring that is happening… The important thing is to get prison space for prisoners so that we can shelve what Lusignan is presently and also some of the other prisons outside of Mazaruni, that is in Georgetown and in Berbice so that the main prison will be at Mazaruni.”

Also, prior to the expansion of the prison, 12 living quarters earmarked for prison staffers at the Mazaruni Prisons have been completed. The minister said that he was happy to see most of them being occupied by the ranks.