The coalition government is pleased with the relationship that has developed between the People’s Republic of China and the Republic of Guyana and remains committed to strengthening these ties. 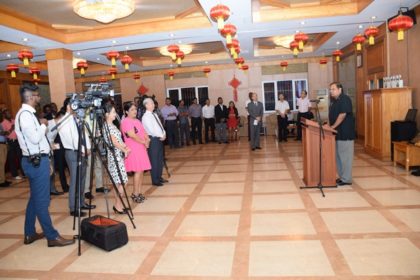 Prime Minister Moses Nagamootoo was at the time addressing those gathered at a reception last evening at the Embassy of the People’s Republic of China, Mandela Avenue, Georgetown in recognition of the last batch of persons trained in the Asian country. A new batch will soon depart to undertake studies in China.

Chinese Ambassador to Guyana, Zhang Limin, through his interpreter said that China will continue to work with Guyana for its further development; however, he is concerned about the negative articles published in the media about Chinese businesses. The Ambassador suggested that only the facts of the matter be stated in the reports instead of speculations. 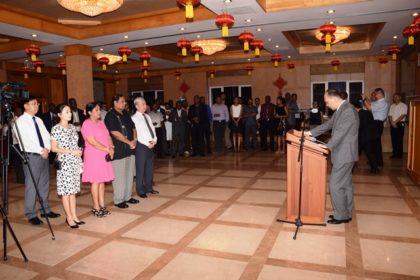 Prime Minister Moses Nagamootoo, his wife Sita Nagamootoo, along with Chinese Ambassador to Guyana Zhang Limin and his wife at the reception for the most recent batch of Guyanese who completed training in China

The Prime Minister explained that it is expected when companies come to Guyana including Chinese companies, they should provide employment for Guyanese, “we would expect them to deal and conform with the laws of Guyana.”

The First Vice President lauded China for supporting Guyana in the area of security and crime fighting. 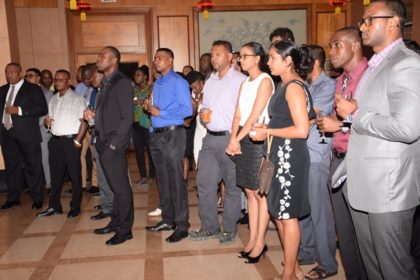 “China helping to train our security personnel is a contribution by the People’s Republic of China in the security sector, not only in the Chinese peoples in Guyana, but all the people of our country, so that we can make our streets safer, and we can make our people secure in their homes and their economic activities,” he said.

Guyana and China’s relationship is more than forging bilateral relations. The Prime Minister has committed to the Chinese Ambassador that the Guyana Government will continue to work toward strengthening relations between the two countries.

Guyana and China enjoy 44 years of bilateral relations which were established on June 27, 1972.