Indigenous communities have seen growth under the Coalition Government. This was the assertion of Prime Minister Hon. Moses Nagamootoo during Saturday’s visit to Aishalton, an Indigenous village in the Upper Takatu-Upper Essequibo Region.

Noting that Indigenous peoples were the first to arrive in Guyana, the Prime Minister said the Government has fulfilled and will continue to honour its obligations in recognising the contributions of the nation’s Indigenous peoples.

Prime Minister Hon. Moses Nagamootoo being greeted by a young lady in Aishalton.

Section of residents from Aishalton at Saturday’s meeting. 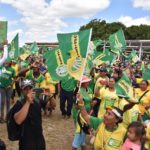 Section of residents from Aishalton at Saturday’s meeting.

“You have the same rights and the same entitlement and under President David Granger and the APNU-AFC Government, you will not be left back,” the Prime Minister asserted.

He commended the government’s memorializing of the nation’s first Indigenous Parliamentarian, with the renaming of the building that houses the Department of Citizenship to the Stephen Campbell House.

The Coalition’s record, particularly in Region 9 was also championed by the Prime Minister.

In addition to Lethem gaining status as a township in 2018, its Magistrate’s Court and Land Registry were tangible changes in the Region, notwithstanding the ongoing upgrades to the town’s aerodrome that is expected to catapult into a regional hub.

Also highlighted was the President’s successful 5 B’s initiative that led to increase school attendance throughout the nation, particularly in rural areas. This programme encompasses the provision of buses, boats, bicycles, breakfasts and books at the State’s expense.

Nevertheless, to expand education in the region, the establishment of the first technical and vocational institute at Bina Hill was declared a major milestone. This accompanies the building of a business incubator under the Small Business Bureau that seeks to develop entrepreneurial skills and businesses.

Some of the other breakthroughs for the Region include the establishment of a radio station at Aishalton, the building of nine wells under GWI, and the unprecedented upgrades to the mammoth road that stems from Lethem to Linden.

During the visit, both the Prime Minister and Minister of Natural Resources were hosted on Radio Aishalton 95.1FM where the Government’s commitment to hinterland communities was reiterated.