Prime Minister Moses Nagamootoo said that he remains committed to seeing the reform of Guyana’s constitution through a consultative process.

Speaking at the launch of the Guyana Extractive Industries Transparency Initiative Multi Stakeholder Group (G-EITI MSG) at the Umana Yana today, the Prime Minister noted that, “Constitutional reform…is going to become the bedrock upon which we build all these lofty edifices.” 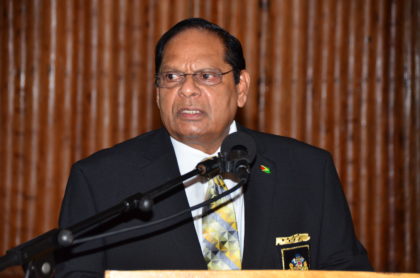 These amendments seek to, among other things, enable the functioning of the Integrity Commission through the appointment of a chairperson. “It is awful to note that for several years you have a Commission to which persons in high offices declare their assets and it was headless,” PM Nagamootoo pointed out.

PM Nagamootoo noted that the progress of the reform will build on the work of the Steering Committee on Constitutional Reform (SCCR) which was established in August 2015. The SCCR was mandated to define the scope of the actual reform process and establish the terms of reference and mechanisms for consultation to establish a Constitution Reform Commission. A report was submitted to the Prime Minister last year.

“The next process would be to go to Parliament to start the consultation with the opposition and civil society groups on the law that would set up mechanisms for constitutional reform,” the Prime Minister explained.

The Prime Minister cautioned that the process was still “in early days” but noted the need to move “with some alacrity to take constitution consultative reform legislation to the Parliament to set up a group that will drive the evidence taking.”

The government has allocated $36M in the national budget towards constitutional reform in 2017. The consultations are expected to last for two years, with over 100 communities being engaged in the process.