Crime Chief, Wendell Blanhum, is in Mexico City to get a first-hand look at its safe city programme. The intention is to have a similar programme implemented here.

The Crime Chief along and an official from the Ministry of Public Infrastructure were invited by Mexican officials to observe the operations of the programme.

Using surveillance camera and a unified command and control centre, the programme has resulted in a 48.9 per cent reduction in crime over a three year period. Vehicle theft was also significantly reduced. This is according to Thales, the security provider which is a partner of the Ciudad Segura programme.

Locally, the Ministry of Public Security has relied heavily on surveillance cameras to help in the fight against crime and traffic violations. Minister of Public Security, Khemraj Ramjattan, announced that the government is seeking to source an additional 300 closed circuit television cameras to aid in crime fighting.

“We’ve already started sending out officials of government and the police to take a look and so that is started. I suppose it will take some time for us to do what is called the final plan as to what we want and then what are the specifications and so on so that there’s going to be durable products that we are procuring,” Ramjattan briefed members of the Canadian Justice Education Society.

The Canadian Justice Education Society was making a donation of forensic video analysis equipment and software packages to the Guyana Forensic Science Laboratory (GFSL) which the Minister received on the laboratory’s behalf.

According to Acting Police Commissioner, David Ramnarine, the training received from the Justice Education Society has had a positive impact on the ability of the force to investigate serious crimes.

Meanwhile, Director of the GFSL, Delon France, updated the minister on the work of the laboratory. France noted that the lab is looking at ways of expanding its scope of testing even as it has validated 50 per cent of the methods outlined in its scope of work. 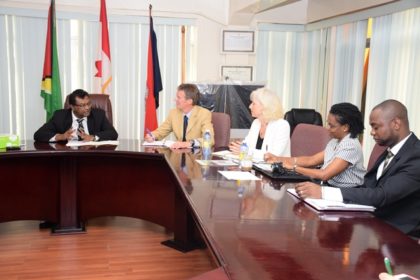 Also, the laboratory is in discussion with the Director of Public Prosecution and the Guyana Police Force on requirements of evidence submission forms so that the GFSL can better carry out its mandate. The laboratory has also been able to assist the police with limited gun residue testing even as it builds the capacity of staff.

“We are going places with these kinds of technologies, training,” Ramjattan said. He however noted that there is still much to be done to arrest criminal activity.

The United Kingdom has proposed to submit documentation on the reform of Guyana’s security sector. America has also pledged assistance to Guyana as this country seeks to reform and enhance national security. Ramjattan said China and Russia have also indicated their willingness to provide resources to Guyana as well.