More than one hundred students were earlier today honoured by the Guyana Police Force (GPF) for their academic achievements over the last school year.

At the GPF’s annual presentation of Bursaries at the Police Officers’ Mess Annexe, Eve Leary, students who gained more than 400 marks at the recently concluded National Grade Six Assessment (NGSA) were awarded multi-year bursaries. Those with less than 400 marks were given a one-time grant by the Police Association. 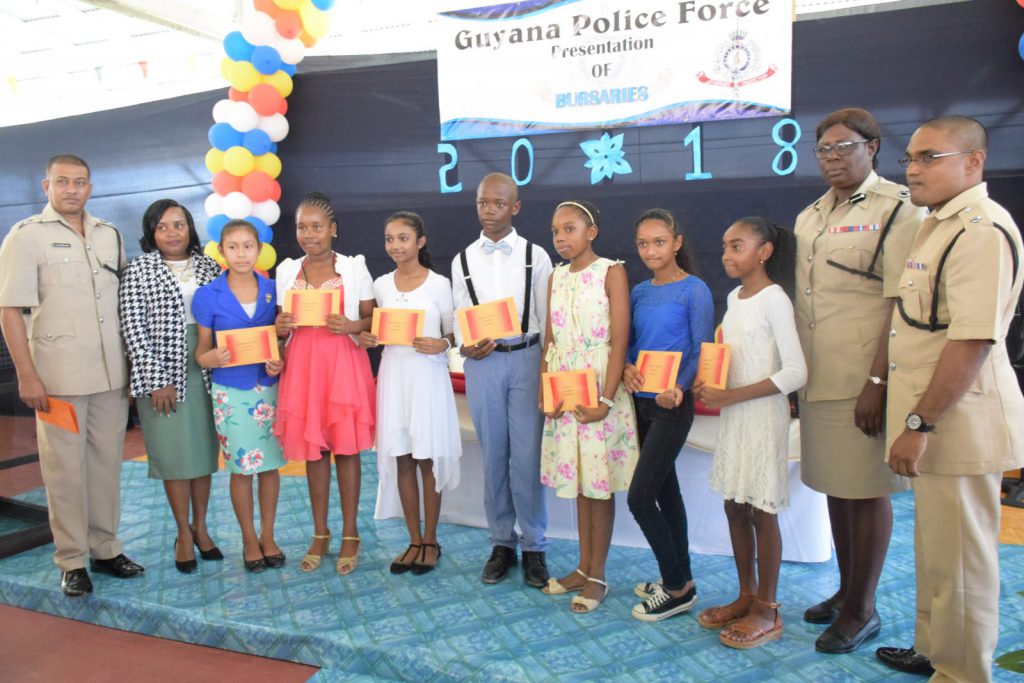 The simple ceremony was chaired by the GPF’s Training Officer, Senior Superintendent F. Karimbaksh who said the bursary payout had a total value of $3.5Million. Special prizes were also awarded to the Finance Department, Police Consumers Co-op Society, Police Credit Union, and the Association of Women Police; 160 persons applied and 114 qualified for the bursary awards this year.

Delivering brief remarks, Woman Assistant Commissioner, Second in Charge ‘Administration’, Maxime Graham encouraged the awardees to be naturally curious, confident and happy learners and to who foster discipline, flexibility, critical thinking and problem-solving skills. “These are attitudes and competencies they will need in the future especially when they confront some difficult and unexpected challenges which are bound to happen along their journey in life,” the Senior Superintendent said.

Meanwhile Assistant CEO, Nursery, of the Ministry of Education, Samantha Williams encouraged the awardees to believe in themselves and never doubt their abilities.

“Remember that you are the only person standing in your way of success. You can achieve and become anything in life only if you believe.”

She also congratulated the parents of the awardees for the support given to their children and commended the Police Force for honouring the students’ achievements.

“You have a role to listen to and speak with your child, you have a role to show love and support to your children, let them know every day how much you care for them, you also have a responsibility of being genuinely involved in the activities of your child’s life. It is occasions like these that help to strengthen the stakeholder collaboration that is needed in order for the Ministry of Education to achieve its mandate,” Williams added.

In 1944, James Felix a police sergeant established a police scholarship fund that assisted children of members of the force at both secondary and tertiary level. In 1948, the fund came under the management committee chaired by the Commissioner of Police. There was a lull in the programme after which it was restored in 1990 under Commissioner Laurie Lewis and funded by the Police Consumers Society.