In the boardroom at GECOM’s headquarters in Kingston, His Excellency, President David Granger signed on behalf of the “A Partnership for National Unity+Alliance for Change, (APNU+AFC) Coalition, while Irfaan Ali signed for the People’s Progressive Party (PPP). 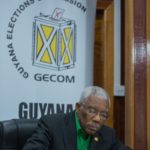 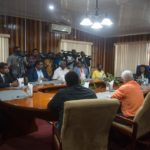 Heads of the political parties meet with Chairman of the Guyana Elections Commission Retired Justice Claudette Singh, to sign GECOM’s Code of Conduct. 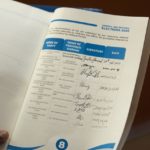 The signed GECOM Code of Conduct.

These two parties are the largest contesting in the upcoming elections.

Absent from today’s signing was; the Federal United Party and Organization for the Victory of The People. However, GECOM Chair, Retired Justice Claudette Singh said the commission’s notice of the signing was dispatched late. Therefore, the absence of any party from the signing is no indication that they would not adhere to the Code of Conduct.

Justice Singh also used the opportunity to urged that peace be maintained throughout the process and the days following.

“It is indeed refreshing to note that many of our political parties have readily consented to abide by the principles embodied in the code by their presence here this afternoon. I would urge all parties to adopt a responsible approach to ensure that in the days leading to elections, during the campaigns that they be free of hate speeches, incitement and provocation which may inevitably invoke emotions in an already charged atmosphere,” the GECOM said.

The Code of Conduct affirms that the political parties’ understand, commit and pledge to ensure peace and public order, have the freedom to campaign and comply with electoral laws and regulations, which are essential to the conduct of free, fair and credible elections.

Parties specifically commit to non-violent relations between its Candidates, Agents, members and supporters and those of other Political Parties.

Among those who witnessed the signing were members of the various observer groups.

In the meantime, on the 43 soldiers and police officers at Eteringbang who were unable to vote at the previous appointed date, GECOM’s Chief Elections Officer, Keith Lowenfield said this has already been addressed and the officers will vote.