– Opposition Leader hoping motion will be carried by a “fluke”

The motion moved by the Opposition Leader, Bharrat Jagdeo was this evening described as “self-serving” by Leader of Government Business in the House and Prime Minister, Moses Nagamootoo.

The Prime Minister, in defending the Coalition Government’s track record in the National Assembly during the debate of the PPP-led no-confidence motion, said the Opposition’s intent is to destabilise the government’s good work thus far. 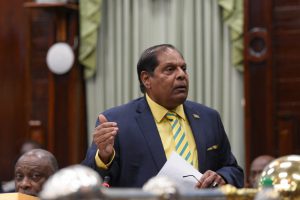 According to Prime Minister Nagamootoo, the Opposition Leader is hoping by a “fluke” the motion is carried and the country will head into an early election since he is disgruntled at the PPP’s loss at the 2015 General Elections.

He said too that opposition Member of Parliament (MP), Irfaan Ali, who currently faces 19 charges of fraud, is also hopeful the motion is successful in the expectation that he would be exonerated.

The motion, the prime minister believes, was moved with political viciousness and resulted in the image of the country being reflected as unstable.

Prime Minister Nagamootoo stated that all the promises in the Coalition Administration will be delivered in due course.

The prime minister reminded that when he moved a no-confidence motion in the then PPP government, instead of debating it, former President Donald Ramotar prorogued the Parliament and called early elections and was defeated.

He highlighted that the motion, which this Government moved while in Opposition, was done on solid grounding, citing the violation of the Constitution and other financial misappropriations.

The APNU+AFC Government, Prime Minister Nagamootoo noted, has restored democracy and guaranteed an open and free media, among other achievements.