Georgetown, Guyana – (July 22, 2016) The Preliminary Report of the Commission of Inquiry (COI) established to probe the circumstances surrounding the fire at the Hadfield Street Drop In Centre, which resulted in the deaths of two young children, was today handed over to Minister of State, Mr. Joseph Harmon, at the Ministry of the Presidency by Commissioner, Retired Colonel Windee Algernon. 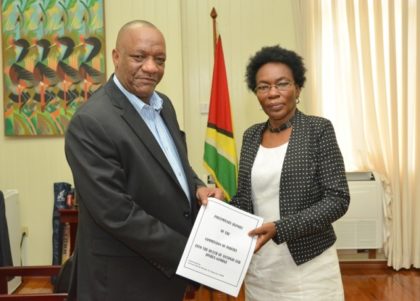 Minister of State, Mr. Joseph Harmon receiving the Preliminary Report of the Commission of Inquiry into the Hadfield Street Drop In Centre fire from Commissioner, Retired Colonel Windee Algernon.

This Report, he said, will now be passed on to President David Granger for his perusal, while the final one will be sent to Cabinet when it has been received.

The preliminary report comes one day after President David Granger announced on the Ministry of the Presidency’s ‘Public Interest’ television programme, that if any person is found culpable of gross negligence or dereliction of duties they will be held accountable.

“If any persons are culpable of gross negligence or dereliction of duties, yes we will make a judgment as to whether they are fit to hold those positions and if you equate that with rolling of heads, then yes but the aim is to prevent a reoccurrence. We need to find out what happened and prevent a reoccurrence. In investigating what occurred, if we find that there was gross dereliction of duties, yes persons who omitted to commit acts, which would have prevented that catastrophe will be punished and if the punishment proposed is that they be removed from their positions so be it,” President Granger told journalists on the programme.

Six-year-old Antonio George and two-year-old Joshua George, perished in the July 8, 2016 fire, after they became trapped in a section of the building.  The Drop-In Centre, which is managed by the Child Care and Protection Agency, at the time of the tragedy, housed 28 children and two adults.