The Guyana Elections Commission (GECOM) today released official results from 2020 General and Regional Elections of some 139 polling places across the country.

The 139 figure represents just over five percent of the total 2,339 polling places.

In the preliminary announcement, the A Partnership for National Unity+Alliance for Change (APNU+AFC) coalition has 19, 135 votes in several regions from a total of 30, 621. 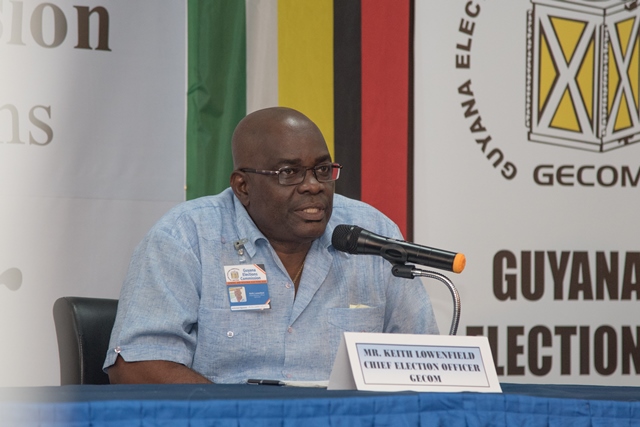 The opposition People’ Progressive Party (PPP) follows with 11, 032. New political parties together including and New and United Guyana (ANUG) Change Guyana (CG), the Justice and Liberty Party (JLP) and the Citizen Initiative (CI) among others, account for some 454 votes so far.

At a press conference today, Chief Elections Officer (CEO) Keith Lowenfield explained that the commission only began receiving declarations from Returning Officers (RO) at 2 am. Most of the outstanding declarations are from the hinterland regions.

“The process entails the RO’s, in the presence of the agents of the respective parties, who the RO’s have asked to walk along with their own statements so that the true verification would have been conducted. In some instances, we started and particularly the counting agents of some parties were not armed with the statements from their parties. We continue to bring closure which will allow for a declaration of the results in all the district today.”

Following that declaration, the CEO noted that the commission will allow political parties to examine the results. Should there be a call for a recount in any district, that will be allowed.

Lowenfiield said the commission has received statements from Region Two and 92 percent of Region Three. For Region Four, some 400 ballots are yet to be received. All of Region Five has been received, while just a few communities in Region Six are to be declared.