–Expresses his confidence in Guyana’s democracy

“Guyana today will demonstrate that it’s a democratic country capable of conducting elections efficiently, credibly in accordance with the law and with the constitution.“

This view was expressed His Excellency David Granger after he exercised his franchise and voted this morning at Pearl Nursery School, Pearl, East Bank Demerara.

The Head of State was the first voter in the queue. 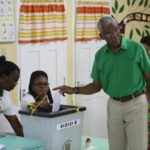 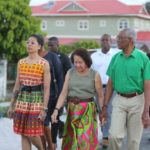 HE President David Granger, First Lady Sandra Granger and their daughter Afuwa Granger make their make to the polling station. 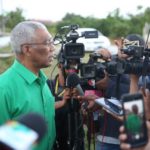 HE President David Granger speaks to the media. 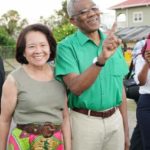 President David Granger shows his inked finger to indicate he has voted. He is accompanied by his wife First Lady Mrs. Sandra Granger

First Lady, Her Excellency Sandra Granger also along with her husband and they were accompanied by their daughter Afuwa Granger.

“I hope people, regardless of their political persuasion, come out and express their opinion in favour of the party of their choice,” the President said.

His Excellency is also functioning as a Polling Agent and plans to spend the rest of the day visiting polling stations. Both President Granger and the First Lady have full confidence in the APNU+AFC’s victory.