President of the Cooperative Republic of Guyana

at the General Assembly of the International Decade of

Education is our culture

The International Decade for People of African Descent

This General Assembly of the International Decade for People of African Descent Assembly-Guyana (IDPADA-G) is an important opportunity to review the past and plan for the future. The Decade began on the 1st January 2015 and will end on the 31st December 2024.  The ‘Decade’ is close to its half-way mark. Half of the life of IDPADA-G has already expired. The clock is ticking.

The International Decade for People of African Descent will not happen again. There will be no other. The United Nations dedicated the first quarter, i.e., twenty-five years, of this new century to emphasise and take action against racism, racial discrimination, xenophobia and related intolerance.

The UN designated a Year for People of African Descent in 2011 and launched the Decade four years later. The Decade is a unique opportunity for African-Guyanese to concentrate their collective experiences and energies so that we could bequeath to our children and grandchildren a better Guyana than we inherited.

The ‘International Decade’ has its antecedents in the World Conference against Racism, Racial Discrimination, Xenophobia and Related Intolerance which was held in Durban, South Africa in 2001. The ‘Conference’ acknowledged that slavery and the Trans-Atlantic Slave Trade were “…among the major sources and manifestations of racism, racial discrimination, xenophobia and related intolerances” and that people of African descent continue to be among the victims of its consequences.

The ‘Conference’ asserted that poverty, underdevelopment, marginalization, social exclusion and economic disparities are associated with racism and racial discrimination. People of African descent still face barriers as a result of social biases and discrimination present in public and private institutions. You must remember that some of the authors of that crime against humanity have never apologised and have never paid reparations.

The Durban Declaration and Programme of Action, which emerged from the ‘Conference’, emphasised the importance of education in combatting racism, racial discrimination, xenophobia and related intolerances. The ‘Declaration’ affirmed that education was essential to:

The United Nations Programme of activities for the implementation of the International Decade for People of African Descent commits UN member states to “support research and educational initiatives” and, also, to:

…ensure that quality education is accessible and available in areas where communities of African descent live, particularly in rural and marginalized communities, with attention to improving the quality of public education.

Education, in this wider cultural context, extends beyond the classroom. It involves peoples’ histories, race, religion and economic political and social relations. Culture, in turn, can impact on the values of education and the way it is organized and taught.

Education prepares people for social integration and cannot be divorced from its cultural context. It has to be responsive to that context and to the challenges which it presents.

“Everywhere in the world, in every era, the educationally and technologically superior have sought to dominate and to inculcate the acceptance of subordination in those they deem to be inferior.”

It is difficult for the extremely poor to be treated, to be regarded, to be perceived as equals. Most poor people are the children of poor people and it is likely that their children will be poor also. Education is essential if the cycle of ‘hereditary poverty’ is to be broken.

Education has been one of the outstanding contributions of African-Guyanese to the nation. Education, next to economic liberation, was the greatest gift of Emancipation. African-Guyanese embraced education as a means of providing a better life for themselves, their families and future generations.  They supported the establishment of social institutions for education and religious instruction, including by providing lands for the establishment of churches and schools.

African-Guyanese were pioneers in providing educational opportunities during the last century. Norman Cameron, an educationist, essayist, mathematician, historian and dramatist established his own school – the Guianese Academy. The Costello brothers – Austin, Cosmo and Joseph – established the Tutorial High School which provided education for children of low-income parents among others.

Access to education created opportunities for the professional development of African-Guyanese. Their presence increased – in public education, public administration, public health, public security and public information – as a result of the educational opportunities.

Emancipated Africans employed their education to re-construct their world.  Education was the gateway to their entry into every field of human endeavour and national life. The African-Guyanese contribution to education played an important part in national integration and should be sustained not supplanted.

The United Nations Programme of activities for the implementation of the International Decade for People of African Descent emphasises the importance of culture. One of the Decade’s objectives is to:

“… promote a greater knowledge of and respect for the diverse heritage, culture

and contribution of people of African descent to the development of societies.”

The history of humanity is the history of interactions. Conquest, travel and migration have exposed people to different cultures. Education has been transformed through these and contacts.

The history of Guyana is one of interactions among various peoples and their cultures. These cultures have added to our cultural diversity and, in turn, have impacted on education.

Language reflects the influence of this diversity. Richard Allsopp pointed to the linguistic contribution of these groups, exemplified in the everyday use of words and expressions which, typically, are Guyanese or creolese – paal, rod, koker and stelling (Dutch); bateau (French), kwe-kwe, fu-fu, metemgee (African), dharoo (Indian) and benab, matapee and warishi (Amerindian). Other expressions – such as ‘eye-pass’, ‘cut-eye’; ‘hard-ears’ and ‘suck-teeth’ – are typical creolese.

The British had a great impact on the public education system. The influence is present through the schools they established, the curricula, uniforms, discipline and the organization of the school year which coincided with the Anglo-Christian school year with its Easter and Christmas terms. You cannot separate education from the cultural experience.

Culture and education interact in the classrooms which, in many secondary schools, consist of a constellation of ethnicities – Africans, Amerindians, Chinese, Indians, Portuguese and persons of mixed ancestry and religious denominations such as Christians, Muslims, Hindus and Rastafarians. Each cultural group has its own customs, dress, festivals, food, holy days and traditions. Schooling exposes Guyanese children to these varied influences.

Religion and education are linked. I recall my own experience when, growing up, I attended four primary schools –  St. John the Baptist Anglican Primary School in Bartica; Auchlyne Church of Scotland School on the Corentyne; Comenius Moravian Primary School in Queenstown and Sacred Heart Roman Catholic School also in Georgetown – all had churches which were annexed or located within the same compound.

I recall, also, that the typical Muslim masjid had a Madrasa – a room for teaching children. The Hindu mandir, also, had a school.   Christian, Hindu and Islamic schools are today once again being established among other things to propagate certain cultural codes. When we speak of education, we are not speaking of a valueless phenomenon. Values are already embedded in those schools.

I pointed out, in an article – The material culture of African-Guyanese – [pub. 29th July 2010], that African-Guyanese, despite two centuries of enslavement, were able to create a distinctive creole culture.

They seized the opportunity of Emancipation to establish the foundations of a civilized life – the quest for education, employment, equality and the pursuit of happiness. They founded over a hundred communities during the post-Emancipation Great Village Movement – that were the wellspring of a distinctive culture.

What came to be called ‘Creole’ culture eventually evolved as the consequence of the economic privation, social subordination and political domination which prevailed at that time.

The term ‘Creole’ – used originally to distinguish local-born from foreign-born – became used widely during the 19th century, according to Brian Moore, to refer to persons of African descent who were distinguished from those of all other ethnic groups.

Creole culture was engendered, therefore, entirely through the African-Guyanese experience. Certain values – cooperative work, love of the land, religious faith, self-reliance and thrift – came to typify their communities at an early stage of development.

I expressed the view, in an address in August 2013, that Guyanese history has been marked by five movements – emancipation, village, political, labour- a very important movement in the Emancipation of the Guyanese people and cultural. Some aspects of the cultural movement have been ignored and that is why I think IDPADA-G should continue to pay attention to the cultural movement because it is inseparable from education. Education is not about pouring water into an empty vessel. It is about inculcating certain values and standards.

The Cultural Movement that sprang from the loins of the Village Movement was propelled by the introduction of universal primary education in 1876. The struggle for civil and political rights started in the late 19th century and early 20th century. The African masses along with other ethnic groups were the motive force in the transformation of a patchwork of plantations into a free nation. During this cultural movement there were the luminaries were: Norman Cameron, the educator and writer who founded the British Guiana Literary Society and the British Guiana Union of Cultural Clubs; Aubrey Williams, acclaimed as one of our greatest artist; Martin Carter, one of our greatest poets; Wilson Harris, one of our greatest writers;  Helen Taitt, one of our most accomplished danseuse; and Valerie Rodway, one of our most outstanding composer of national and patriotic songs. All of these were part of the cultural movement which made us what we are.

The great value African-Guyanese placed on their ancestors’ historical achievements by erecting memorial monuments was a distinctive characteristic of creole society. The most important events have been Emancipation in 1838, the purchase and foundation of the villages in the 19th century and Independence in 1966. Some typical examples are:

Monuments erected in homage to important personages memorialise their outstanding stewardship and leadership.  In some instances, the names of personages – village leaders – have been inscribed on monuments marking their accomplishments. There are several examples:

These are important landmarks in the educational and cultural development of this nation.

Other events which have been memorialised are revolts prior to 1838. There are three main national monuments:

A vibrant African-Guyanese press flourished – the Freeman’s Sentinel, Creole, Liberator, Working Man and Villager – which helped to inform the public and articulate the opinions of the community. Books on African-Guyanese history followed their exemplary lead:

You cannot understand what we are going through and what we need to do without careful analysis, research, without a deep understanding of these things which are being documented.

IDPADA-G has a mission, an obligation, a duty to conduct this sort of education because you cannot solve a problem if you do not know the nature of the problem.

Creole cuisine is still very popular throughout the year. It is clear from these examples that, from the time of the founding of the villages over 180 years ago, the founders’ resourcefulness and ingenuity in laying the foundation of the nation were evident.

The ‘International Decade’ – conceived and planned to remedy the legacy of discrimination, disempowerment and dispossession caused by the Trans-Atlantic trade and the enslavement of persons of African descent – identified education as an important vehicle for empowering persons of African descent. We cannot move forward without arming ourselves with these educational tools.

The ‘International Decade’ would have failed in its mission if it tried to separate education from culture.  Education is the principal means through which culture is propagated and preserved. Culture, in turn, shapes educational development.

This Assembly could do well to preserve that precious legacy of education which was bequeathed by the African-Guyanese forefathers. It would be a most fitting tribute and an enduring monument to the International Decade for People of African Descent. 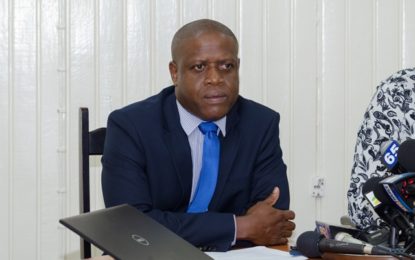