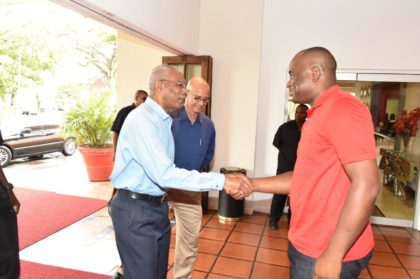 President David Granger exchanges a handshake with the Prime Minister Roosevelt Skerrit upon his arrival at the Pegasus Hotel, this morning, for a Breakfast meeting

His Excellency President David Granger, this morning, sat down for a breakfast meeting with the Right Honourable, Roosevelt Skerrit, Prime Minister of Dominica, who is in Guyana for the Caribbean Community’s (CARICOM) Thirty-Seventh Regular Meeting of the Heads of Government.

Secretary General of CARICOM, Ambassador Irwin LaRocque was also present at the meeting.