During the meeting, discussions were held on a number of local and global issues including the climate change phenomenon, Guyana’s transition to a ‘green economy’, the Iwokrama International Centre for Rainforest Conservation and Development, the upcoming CARICOM Heads of Government Summit, the European Union and the 50th anniversary of bilateral relations between Guyana and Germany, which will be observed in September of this year. 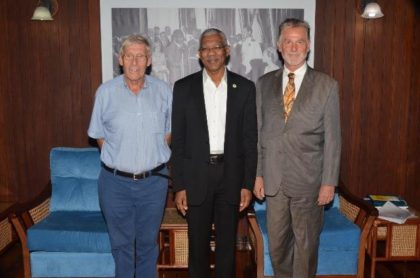 Guyana and the Federal Republic of Germany established formal diplomatic relations in September 1966, shortly after Guyana gained its Independence in May of that year. Since then, the two nations have collaborated in a number of areas, particularly as it relates to forest preservation and climate change within the framework of the Caribbean Renewable Energy Development Programme, which was implemented in 2004.

Mr. Ben ter Welle the Honorary Consul of the Federal Republic of Germany in Guyana accompanied the Ambassador to the Ministry.