His Excellency President David Granger this evening has asked that Guyanese be patient as the country awaits the official results from the Guyana Elections Commission (GECOM).

Hundreds of party supporters today converged at the APNU+AFC headquarters, demonstrating their support for the government following the successful holding of the March 2, General and Regional Elections. 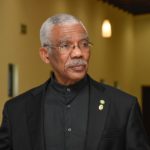 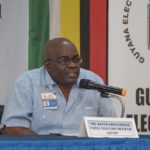 While regional figures have already been declared for most of the region, GECOM is yet to complete the verification process for Region Four (Demerara-Mahaica).

“I cannot make a declaration tonight because the Guyana Elections Commission itself has not received all of the declarations from the Returning Officer. APNU+AFC has made some challenges is some of the reasons as well as the opposition PPP. Right now, verification is still taking place. The numbers have not been verified and we cannot make an announcement until the elections commission makes a declaration,” President Granger said at the party’s campaign office at Lamaha Street.

The Head of State said he had hoped that by now the declaration would have been made. However, it will not since verification will be ongoing throughout the night.

“I ask you to be patient and we hope that tomorrow Thursday, the Chairman of the Elections Commission would make some form of declaration. But right now, it is quite impossible since nobody knows the final scores,” the President said.

“I crave your indulgence, let us patiently wait until the declaration comes from the elections commission.”

In the meantime, Chief Elections Officer (CEO) of GECOM Keith Lowenfield said some hiccups halted the process for some time. He said however that the process resumed this evening with the verification of the 192 Statements of Poll (SOP) from the East Bank of Demerara. Upon completion officials will verify the 170 SOPs on the East Coast before completing the remainder in the city. So far, North and South Georgetown have been completed.

“Once that process is finished, there will be a declaration for Region Four. The law prescribes that once there is a declaration by the following day, once there is need for a recount, that will be done before making the final declaration of the elections, “he told the media this evening.

Lowenfield said the commission is working to ensure that everything is in order in the fastest possible time and also advised that Guyanese should remain calm.