President David Granger has urged residents of Blairmont, West Coast Berbice to use their religious faith to promote peace, unity and harmony even as the administration continues to work to transform the country into a more cohesive society. The President was at the time speaking at the prana pratistha or consecration ceremony of a 4.5 metre tall ‘murti’ (statue) of the Hindu God, Lord Hanuman at the Blairmont Mandir. 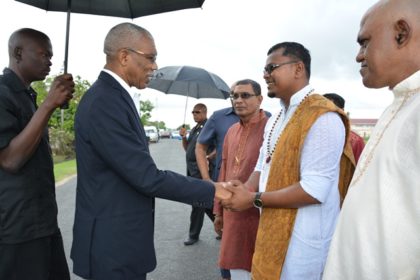 President David Granger being welcomed to the Blairmont Mandir for the prana pratistha ceremony of the Lord Hanuman Murti by Pandit Rajin Lallaram, this morning.

President Granger said that he was extremely happy to receive an invitation to worship with them on this important occasion, which he said is evidence of the deep roots of Hinduism in Guyana. He reminded the gathering of his oath to serve as President of all of Guyana and said Guyana is a strong country because each ethnic group brings different strengths and is necessary for national development.

“The Blairmont Mandir stands on sacred ground.  It is central to the spiritual life of residents on the West Bank of Berbice. Devotees assemble there to worship and to enrich their spirituality so that they can learn and live according to the precepts of Hinduism… [This mandir] provides services to the community and brings residents together to improve their own lives.  It must continue to be a beacon to guide this community,” the Head of State said. 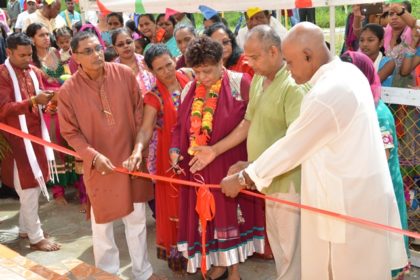 Minister of Social Cohesion, Ms. Amna Ally assisting in the cutting of the ribbon to officially mark the unveiling of the Lord Hanuman Murti at Blairmont.

Speaking of Guyana’s culturally diverse society, the President said that he is of the firm view that the different ethnic and religious groups in Guyana need to develop a greater understanding of each other, so as to fully appreciate the richness of the nation’s diversity and strength of the country as a whole.

He also spoke of the importance of Hinduism in Guyana, which dates back 178 years. It was brought to the country by Indian indentured labourers in 1838 and today constitutes a significant demographic element. “This magnificent murti of Lord Hanuman is a public manifestation of private devotion. It is a physical expression of a divine spirit. It can be seen far and wide by anyone approaching Blairmont. It is proof that the adoration of Lord Hanuman is widespread. It is a reminder that his own grace is cast over the entire community,” President Granger said. 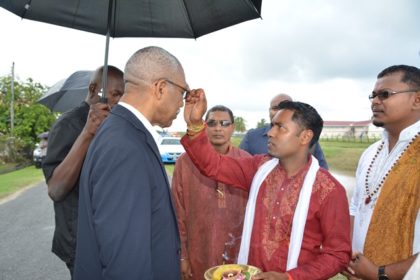 A member of the Blairmont Mandir applying the chandan tika on President David Granger’s forehead upon his arrival at the prana pratistha ceremony of the Lord Hanuman Murti.

Meanwhile, officiating priest, Pandit Rajin Lallaram in his remarks said that the erection of the murti must serve as a source of motivation and strength for people as the deal with the everyday challenges that life presents.

“Everyday we awake we are greeted with some trial, some difficulty for which we have to be in the unending process of finding solutions. So today with this establishment of this murti, I am sure that it will give us an opportunity to reflect on the strengths that lie within us and to use that strength, courage, inner will and power to contribute to a better society, a better nation and the world by extension,” Pandit Lallaram said.

The murti, which stands on a concrete platform immediately next to the mandir, was constructed at the cost of over $900,000 by a privately owned company, located at Strathspey Village, East Coast Demerara.

President David Granger took part in the ceremonial bathing of the murti at Blairmont, this morning. 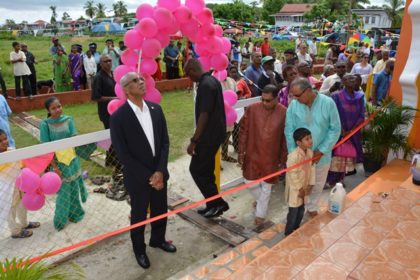