-in observance of International Day of the Girl Child

Georgetown, Guyana – (October 9, 2018) As Guyana joins the world to celebrate International Day of the Girl Child on Thursday, October 11, 2018, President David Granger, this morning, made it clear that his Government values the rights of children, particularly girls, as 18-year old Ms. Renuka Persaud was given the opportunity to act as ‘President for the Day’.

Two other young ladies, Ms. Delicia George and Ms. Sara Mohan were given the opportunity to act as Prime Minister and Canadian High Commissioner to Guyana for the day taking up the posts of Mr. Moses Nagamootoo and Ms. Lilian Chatterjee respectively. 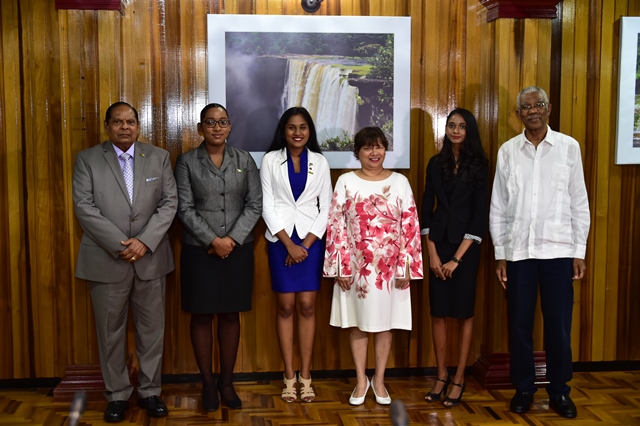 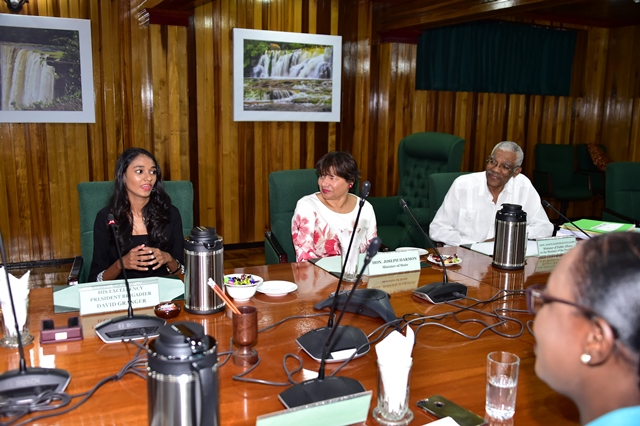 Meanwhile, during a courtesy call at Cabinet this morning, where both President Granger and Prime Minister Nagamootoo gave up their seats, Ms. Persaud said observing International Day of the Girl Child, in her opinion, means raising awareness both locally and internationally about the human rights of girls. Women and girls, she said, play an integral role in society and it is imperative that their rights be respected.

Similarly, Prime Minister for the Day Ms. George, in her presentation, urged women to “break glass ceilings” and to pursue initiatives, which can help them to become better individuals and positive contributors to society.

“Women and girls are often not in high positions. Some of the challenges and barriers for girls in Guyana are teenage pregnancy, the ‘glass ceiling’ and also unemployment, just to name a few. The theme for this year’s observance is “With Her: A Skilled GirlForce” and because a lot of girls are sometimes ill-equipped, they are taken for granted; they are offered positions paying low amounts of money and I believe that if girls seek developmental opportunities, they will be able to break such barriers. I must applaud the Government of Guyana for its policy for the reintegration of teenage mothers into schools. My advice today for girls is to seek development, believe in yourself, resist being normal and pierce the unacknowledged barriers to achieve a successful future,” she said.

Ms. Mohan used the opportunity to call for more action rather than lip service, to conquer gender inequality and violence against women and girls.

The trio was also given the opportunity to share their experiences thus far and all concluded that “it is indeed hard work” serving as President, Prime Minister and Canadian High Commissioner.

Moreover, Mrs. Granger praised the initiative as she noted that “it allows our girls to dream as big dreams as they want to.”

While this is the second year the Canadian High Commission has partnered with the Government of Guyana to afford girls such opportunities, this is the first year that there has been a ‘President for the Day’.

As part of the activities, each of the girls was given a tour of their respective offices and Parliament Buildings. They were also treated to tea with the Speaker of the National Assembly, Dr. Barton Scotland.