– pandemic resulted in delay of upgrading to drainage system

With several areas in Georgetown experiencing flooding due to high instances of rainfall over the last 48 hours, the National Drainage and Irrigation Authority (NDIA) has intensified its operations to ensure flood waters recede within the shortest possible time. 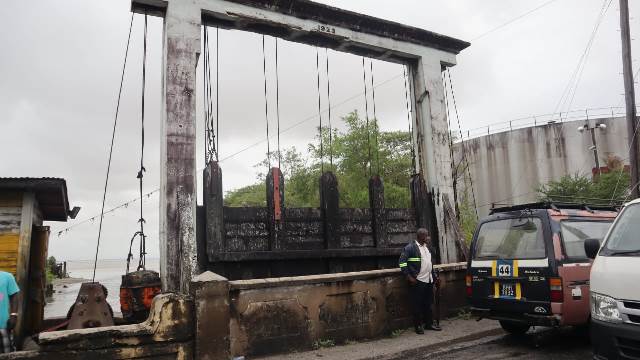 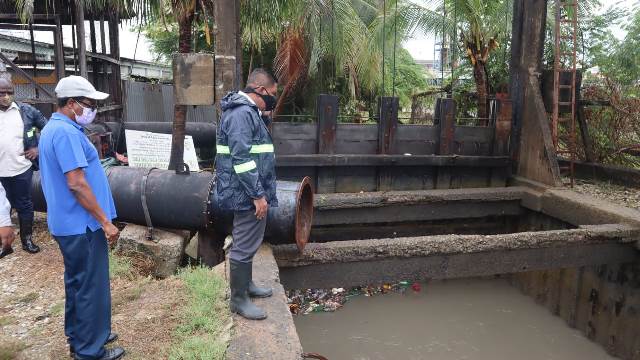 Minister Mustapha said most of the structures are operable and systems are being put in place to reduce flooding in the city soon.

“Our engineers have been working around the clock to ensure these pump stations are functioning effectively. We know for a fact that the entire Coast is below sea level and with climate change contributing to higher water levels and unpredictable weather conditions, the Coastal Regions have become even more vulnerable. Our current drainage system is only capable of draining just about two to two point five inches of water within a 24-hour period. Given the fact that Georgetown experienced almost five inches of rainfall, you can understand the amount of pressure it placed on the drainage system,” Minister Mustapha said.

Minister Mustapha further stated that the Ministry is putting a number of other systems in place to assist with the flooding. He also signalled a call to residents to desist from dumping garbage in the waterways.

“In addition to having our fixed pumps working, we have placed a number of mobile pumps at specific areas that need additional drainage. We are also desilting the main drainage canals in these communities. I am pleading with residents to desist from littering. We spend a lot of money to install these structures and often times they are damaged when garbage gets into the pipes and other parts of the structures. We need to develop a partnership. Government will play its part, but we need the citizens to play their part and be more responsible with their garbage disposal,” Minister Mustapha said.

The Hydromet Department reported that as at 08:00 hours this morning, Georgetown recorded the highest level of rainfall in the country with approximately 120.3mm of rain within the last 24 hours.

Further, Minister Mustapha called on the Georgetown Mayor and City Council (M&CC) to be more proactive and responsive in addressing the issues of several deplorable drainage structures in the city.

“Most of the pumps around the city were left in a deplorable state and non-functional for a number of years. The Council collects billions of dollars in taxes annually and yet they continue to fail the people of Georgetown with their inability to provide basic services such as the cleaning of drains and other waterways. I’m calling on the M&CC to take maintaining these drains and structures seriously. For instance, when we were in Opposition, we spoke about the state of the of the drains on Sheriff Street. These drains are in desperate need of clearing and that has also contributed to the flooding in areas like Bel Air Park and its environs,” Minister Mustapha said.

Additional pumps to be installed

Following the visits, Minister Mustapha met with a team of engineers from India, who are here to install nine new pumps in flood prone areas along the Coast. The team indicated that it will take a minimum of two weeks to install each pump, and installation will occur concurrently with other stations.

The pumps will be placed at strategic areas in Den Amstel, Hope, Mora Point, Rose Hall. Pumps will also be placed at Princes Street, Sussex Street and Cowan Street in Georgetown.

During the meeting, Minister Mustapha stressed the urgency of having the pumps in place.

“We need these pumps installed urgently. You see the current weather conditions and how the rains and flooding affect the daily operations of our citizens. We are depending on you to work swiftly.”

Minister Mustapha pointed out that NDIA was working to have them installed ahead of this year’s rainy season, but given the travel and other restrictions enforced due to COVID-19, there was a delay in the arrival of the team from India.

The team is expected to commence installation of the pumps on Thursday.

Update on flooding in Georgetown

As at 16:00hrs today, flood waters in parts of South Georgetown, Bel Air, Alberttown Queenstown, Avenue of the Republic, Bourda, and Kitty/Campbellville have started to receded to some extent. NDIA engineers have reported that within the next 24 to 48 hours all areas should be completely drained if there are no further instances of heavy rainfall.