Farmers from the island of Wakenaam will soon benefit from the services of a new excavator to assist with drainage and irrigation works. This was disclosed by Agriculture Minister, Hon. Zulfikar Mustapha during a recent outreach to the island, where he met with farmers to listen to their issues.

During the meeting Essequibo Islands-West Demerara Regional Chairman, Mr. Ishan Ayube said that there is need for a new excavator on the island to assist with the digging and maintenance of the canals. 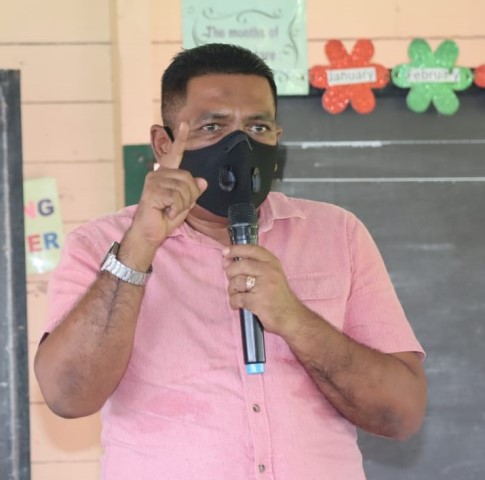 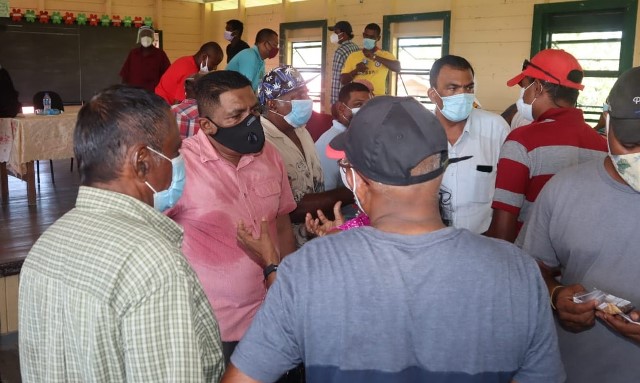 Minister Mustapha engaging a group of farmers from Wakenaam

“We have an excavator that is 11 years old. It has worked successfully in the past but it has reached a stage where maintenance is becoming a problem, its work hours is a problem and we are getting less rodage because of its age.  I’m asking, on behalf of the residents and the farmers of Wakenaam, for a new excavator,” Mr. Ayube said.

In responding to the request, Minister Mustapha committed to having a new excavator stationed on the island before the end of the year.

“I know that the excavator you have here is not working effectively. I’ve just consulted with my technical officers. We’ll be purchasing some new excavators and I’ll assign one to the island. So before the end of this year, you will have a brand new long-boom excavator on the island to help with the digging and clearing of the canals. I’ve also instructed the NDIA to send a bulldozer to the island to complete all the work before it returns to Georgetown,” Minister Mustapha said.

The subject Minister also committed to having his Ministry conduct a needs assessment in order to develop a work programme for works needed on the island.

The Regional Chairman also said that there is need for assistance with their current maintenance programme.

“There were several complaints to the NDIA by farmers on the way the programme was kept. Complaints that we were doing mainly spraying, weeding and, to some extent, using an excavator. We were written by NDIA last year and in August of this year, we were told to only prepare trenches that were done by weeding or excavation. It will cost $3.5 million to do a maintenance programme with only weeding. The NDC cannot afford to do weeding maintenance programme or excavation programme with the current tax valuation and the current NDIA grant. If we were able to continue with the spraying and the other maintenance, which was successful to about 90 per cent, one month’s maintenance would cost about $1.7 million and we would have been able to manage that,” the Chairman said.

However, Minister Mustapha said that the Ministry will not encourage the spraying of chemicals as a means of weed control, noting the negative effects these chemicals have on the eco-system.

“I will not encourage contractors or persons who are working to clean the canals to spray chemicals as a means of weed control. While you are spraying the surface, the weeds would grow or end up at the bottom, and as the seasons progress, you will find that the canals becoming shallow,” Minister Mustapha said.

Mr. Joseph Juman, a farmer, said that there is an issue with coconut cockle affecting farmers on the island.

Minister Mustapha informed the farmers that this Government is placing a lot of emphasis on coconut production and as such, will ensure extension officers from NAREI work with farmers to assist with this issue.

“Coconuts have the potential to bring in a large amount of foreign currency for our economy. This multipurpose commodity is now taking the world by storm and we will be putting a lot of effort and emphasis to ensure we develop our coconut industry. Government will be making resources available to increase research in order to strengthen the sector. We will also be constructing two new coconut nurseries so that planting material can be readily available and farmers can have better guidance in order to expand their cultivation. NAREI’s extension officers will also be coming to your farms to assist you with the coconut cockle infestation within the coming days. Extension services will also be increased tremendously,” Minister Mustapha said.

Requests were also made for a drying floor for paddy to be constructed on the island and additional markets for farmers’ crops. Minister Mustapha told the farmers that if the Region can identify the land, the Ministry, through the Guyana Rice Development Board, will work with officials to construct a drying floor. He also told the farmers that Government is in the process of revamping the mandate of the Guyana Marketing Corporation. This agency, the Minister said, will now be responsible for securing continuous markets for farmers’ produce.

Accompanying the Minister on the outreach was Ministry of Agriculture Director General, Madanlall Ramraj and other Heads of Agencies.