Press Release – ‘You have a lot of issues to iron out’ – Min. Mustapha to new MARDS Board

– default lease payments, subletting among issues to be addressed

– urges Board to have discussions with farmers

During the meeting, Minister Mustapha said Cabinet has reposed confidence in the new Board to ensure the scheme functions effectively. 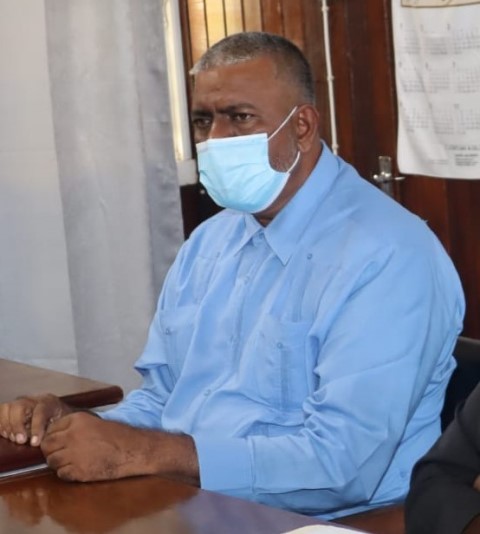 Newly elected Chairman of the MARDS Board of Directors, Mohamed Zaid Rafeeoodeen..

However, he urged the new Board members to get to work immediately given the current issues faced in the scheme.

“A number of issues have developed over the years and I hope that you will work to resolve those issues in a timely manner. At MARDS, there is a lot of dissatisfaction among the farmers and we have to ensure that we correct the problems that are currently existing in the Scheme. People who’ve had leases over the years, the leases have expired but they continue to occupy the land. Some persons are even subletting these lands for double the price they are paying to MARDS. If they themselves are planting the lands, you can work with them to renew these leases. We have to look at all these issues. At the same time, when dealing with these issues, we must not be high-handed or arrogant. We need to have discussions with the farmers and find an amicable way to resolve these issues,” Minister Mustapha said.

The Board, which will be in place for 12 months, will be responsible for dealing with all matters relating to the proper management of the scheme, as well as making suggestion and representation to the Ministry for decisions that have to be made at the Government level.

Newly appointed Chairman of the Board, Mr. Mohamed Zaid Rafeeoodeen, while addressing the new members, said the Government can expect the Board’s full cooperation to move the Scheme in a positive direction in keeping with the Government’s vision and the interest of the farmers.

“Minister, I want to assure you that I will do my best and you can expect nothing less than that, in managing the affairs of this corporation. I would like to also encourage the Board members to remember that we were all appointed as a team to manage the affairs of MARDS and I am expecting that we work as a team. Like Minister would have said, we must work for the betterment of the agriculture sector and more so, the farmers that we have in MARDS. They are depending on us and if we don’t manage well it is going to affect their lives. Therefore, as a team we must manage well to ensure that we bring relief and change the life of the farmers for the better. There is no other option,” Mr. Rafeeoodeen said.

Minister Mustapha also said that there should be a review of the leases given in order to ensure the proper procedures were followed.

“We have to look at these leases to understand how things were done and how we will go about giving new allocations. We also have to come up with a favourable system to deal with farmers who are delinquent with their lease payments. I am not saying that the Board should take lands away from people, but there are a number of small farmers who need lands to plant, that end up renting lands from persons who have leases, at very high prices. We must ensure we work with the farmers to collect these fees so that we can further develop the scheme,” Minister Mustapha said.

On acceding to office in August, the Government disclosed that most of Governmental agencies were in a terrible financial state.

During his first press briefing, Minister Mustapha disclosed that most of the agencies under the Ministry of Agriculture were cash-strapped. This, he added, was due to clear mismanagement of funds and a ‘lacklustre approach’ to the execution of several projects.

As it relates to MARDS, over $66M is owed to the authority by farmers who are in default of payments. One of the first charges to the Board was to work with farmers to develop payment arrangements for outstanding fees.