(Office of the Prime Minister, July 25, 2016)- Prime Minister Moses Nagamootoo has committed to providing support for the upgrading of Radio Paiwomak which is based at Bina Hill, Annai.

On a recent visit to Regions 8 and 9, the Prime Minister toured Radio Paiwomak’s studio and observed the shabby conditions and lack of suitable chairs and furnishings for the announcers.

Prime Minister Nagamootoo observed broken windows, a rotting and leaking roof and the unsuitable conditions under which the equipment are being stored. 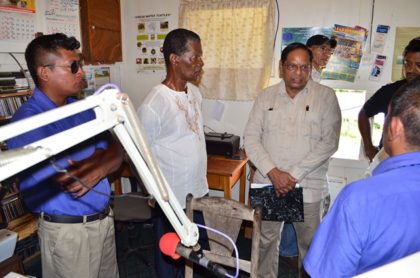 Prime Minister Moses Nagamootoo and Virgil Harding along with other officials in the Radio Paiwomak studio.

He immediately asked that Radio Paiwomak’s Coordinator, Virgil Harding meet with Director of Public Information Imran Khan to itemise the station’s needs and to provide immediate support to upgrade the facilities.

Harding also expressed the need to add another 50 feet on the 100-foot transmission tower and directional antennas to allow for greater signal reach, as far as Fairview on the bank of the Essequibo River. Prime Minister Nagamootoo gave a commitment to give this request consideration for the 2017 budget. A structure for better compensation for the Radio Paiwomak administrator and announcers will also be pursued as part of the next budget cycle. 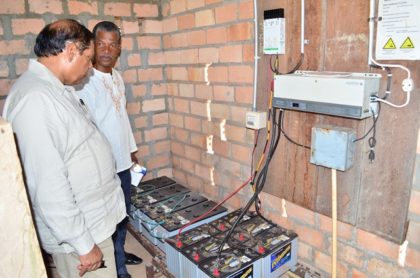 Prime Minister Nagamootoo instructed that plans be put in place to conduct an introductory training programme for new broadcasters to train persons in the North Rupununi interested in radio broadcasting.

During the visit, the Prime Minister and his delegation which included Vice President and Minister of Indigenous Peoples’ Affairs, Sydney Allicock, also met with the executives of the North Rupununi District Development Board (NRDDB) to listen to issues of concern. The NRDDB is made up of 18 villages and 3 satellite communities.

Prime Minister Nagamootoo presented a Certificate of Recognition to the NRDDB for their work in the social and economic upliftment of the North Rupununi. He also presented a similar certificate to the Annai Secondary School for winning the inaugural LCDS-Climate Change National Quiz Competition. He further presented solar LED lights to children from the communities to assist them in reading and preparing for classes and examinations. 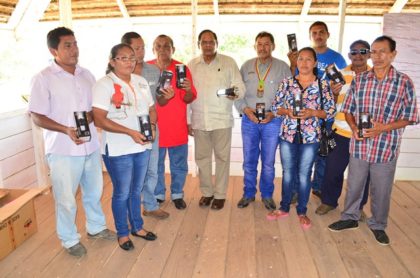 Radio Paiwomak is the first hinterland community radio station in Guyana and was launched in 2000. It has provided continuous service to the communities of the North Rupununi for almost 16 years and broadcasts in English and Amerindian languages. In 2015 the station had suffered from a critical loss of power and the Office of the Prime Minister presented batteries costing several hundred of thousand dollars which allowed the radio station to continue its broadcasts uninterrupted.