(Office of the Prime Minister, July 25, 2016) – Prime Minister Moses Nagamootoo today made a special plea on behalf of the people of the North Rupununi to local airline operators to explore the possibility of regularly scheduled flights to Annai, Region Nine. 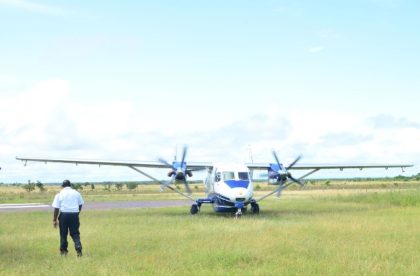 An aircraft arriving at the Annai airstrip.

On a two-day visit to villages in Regions 8 and 9 on Friday and Saturday, residents raised the issue with the Prime Minister and sought his assistance. Previously there were daily flights to Annai, but this ceased and persons travelling to and from the North Rupununi have to journey several hours by trail to Lethem to depart via daily flights from the Lethem airstrip. Alternatively, they can travel to Georgetown by trail which takes between 10 to 12 hours by bus and includes crossing the Essequibo River by ferry at the privately operated Kurupukari Crossing.

A teacher of the Annai Secondary School receives the OPM Certificate of Recognition from Mrs Sita Nagamootoo while Prime Minister Moses Nagamootoo and VP Sydney Allicock look on.

Residents recommended either two or three regularly scheduled flights per week, depending on demand. This was one of several issues raised by residents at meetings at Annai, Surama and Fairview with the Prime Minister and his delegation which included Vice President and Minister of Indigenous Peoples’ Affairs, Sydney Allicock, Director of Public Information, Imran Khan and Chief Executive Officer of Iwokrama, Dane Gobin. 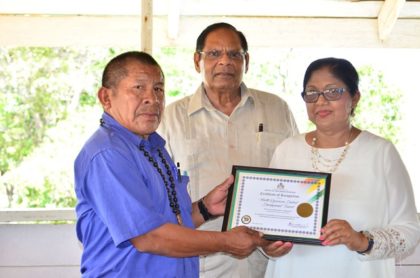 Prime Minister Nagamootoo, who was also accompanied by his wife Mrs Sita Nagamootoo, also visited the Iwokrama River Lodge and Research Centre, the Iwokrama Saw Mill where responsibly harvested logs are processed and also trekked to the Canopy Walkway at the Atta Rainforest Lodge before departing for Georgetown from the newly resurfaced and extended Surama airstrip. 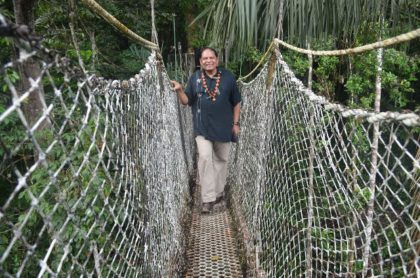 During the meetings residents raised issues relating to the provision of better health services, better dorms, staff room and classroom facilities at the Annai Secondary School, the provision of electricity via solar panels and access to government services.

The Prime Minister made donations of solar LED lights to assist children, at night, with reading and preparing for classes and examinations. 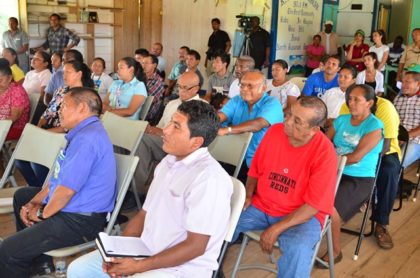 Executives of the NRDDB listening to points being made during the meeting with the Prime Minister and his delegation.