(Office of the Prime Minister, July 27, 2016) – Prime Minister Moses Nagamootoo today met with a delegation of Wales Estate sugar workers to listen to their concerns regarding the payment of their severance package.

The 11 person delegation sought a meeting with the Prime Minister in order to explain their plight relating to the payment of the GuySuCo severance package.

The workers explained that GuySuCo officials met with them and explained the plan to merge the Wales and Uitvlugt factory operations and that they would be offered continued employment at the Uitvlugt estate. 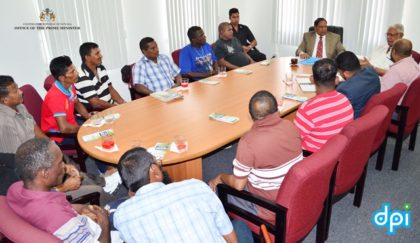 The workers explained that shortly before the date on which the severance was to have been paid the Guyana Agricultural Workers Union (GAWU) and the National Association of Agricultural, Commercial and Industrial Employees (NAACIE) sought and received an order of the court which stopped GuySuCo from making the payments.

The workers expressed frustration that several months have now passed and GuySuCo continues to be prevented from effecting the payments by order of the court.

Prime Minister Nagamootoo conveyed to the delegation that he had been advised that GuySuCo is prepared to pay the severance and monies have been set aside for same but the company could not act in violation of the injunction. Minister of Agriculture, Noel Holder, who joined the meeting at the request of Prime Minister Nagamootoo confirmed that GuySuCo is prepared to effect the payment with immediate effect should the order of the court be lifted.

The workers thanked the Prime Minister and the Minister of Agriculture for this information and explained that they had been erroneously advised by union officials that GuySuCo was not prepared to make the severance payments. The workers also briefed the Prime Minister and Minister Holder that they had held several meetings with the union officials and pleaded that the injunction be withdrawn to allow for the payments to be made but they pleas fell on deaf ears.

Prime Minister Nagamootoo explained that GuySuCo’s hands are tied in the matter as the company must comply with the order of the court and that the workers must make further representations to GAWU and NAACIE for them to gain relief.

They expressed understanding for the need to merge the Wales and Uitvlugt factory operations and opted for the severance to get on with their lives but were now made to face undue hardships given the amount of time that has passed after they had expected to be paid.