Georgetown, Guyana – (March 28, 2018) President David Granger told the residents of Tuseneng, Potaro-Siparuni (Region Eight) that the keys to improving the economic prospects of their village and region lies in improving the physical infrastructure to reduce the cost of transportation for goods to markets, the use of sustainable energy to reduce the cost of production, the development of thriving agro-processing initiatives and cooperation between all levels of Government and between all levels of Government and the private sector. Describing his visit to participate in the Regional Agricultural and Commercial Exhibition (RACE) 2018 as a business mission, the Head of State called on the Regional Chairman to work with the Government to promote Region Eight as a destination for investment. 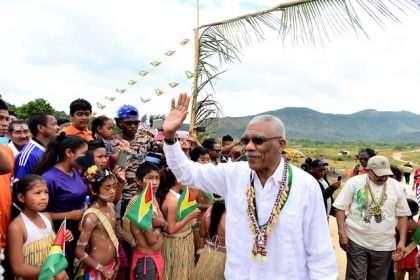 President David Granger is greeted by residents on his arrival at Tuseneng for the Regional Agricultural and Commercial Exhibition (RACE) 2018.

“Being here is not ornamental, he [the Regional Chairman] is here and I would like to ask him to sell Region Eight as a destination for investment. Let the people who dig the gold and diamonds out of Region Eight bring money in to invest in farms and factories to make Region Eight more prosperous. We need investment in this Region.  We have the land, we have the labour… what we need is the capital. We need the investment,” President Granger said.

The President described the exhibition, the eight of its kind in 20 months in Guyana, as important since each RACE event has allowed the regions to zero in on their economic potential, based on their available natural and human resources. The Potaro-Siparuni, he said, is known for its fertile valleys and is capable of producing some of the finest agricultural products in the country. Infrastructural challenges, however, particularly in remote villages like Tuseneng, is a challenge that the Government must work with the Region to overcome.  He said, “Everyone one of you knows that this region has the potential, not only to feed itself, but to feed the rest of Guyana, but the difficulty is not only in producing the commodity but getting it to the market… I want the people of the Potaro-Siparuni to be able to drive from the East to the West, from the North to the South, like any other Region.  We can’t do this this week or next month, but we are working to ensure that the infrastructure is developed in this great region.”

Noting that miners and other investors coming into the Region to tap into the mineral rich potential of the Region create opportunities for the marketing of local produce, President Granger said that every household can get involved in producing and preserving local items for sale locally and for export. “I’m asking the Toshao to work with the Regional Chairman to see how we can get more food into the miners, more food into the markets and we can do this by agro-processing.  It means that everything you produce here; every tomato, every potato, all the fruits, all the vegetables could be processed so they can be packaged and taken to the markets.  That is what farming is all about.  It’s not only about producing, but it’s also about agro-processing,” he said. 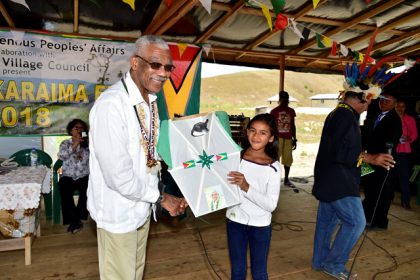 The Head of State got the easter season off to a flying start, providing kites to the children in attendance at the Regional Agricultural and Commercial Exhibition (RACE) 2018 at Tuseneng.

President Granger also said that economic and trade fairs, such as RACE offers the opportunity for members of the private sector to collaborate with the Central Government, the regional administration and the village leaders to take advantage of business opportunities and help to propel the Region’s economic prospects forward. “This is not a casual excursion. I’ve come here on a business mission; I’ve come here to examine the potential of this community, to see in what ways we can increase the profit to ensure there is greater participation and to provide an opportunity for you to do better,” the Head of State said.

Additionally, President Granger also iterated his Government’s commitment to improving communication and harnessing the natural environment to over time reduce the cost of energy through the implementation of innovative and sustainable technology solutions.

Ministry of Indigenous Peoples’ Affairs, Mr. Sydney Allicock, emphasised the importance of the development of Village Improvement Plans (VIPs), which is an initiative of the Head of State, to ensure that optimum use is made of resources within village economies that can be engines of national development. He too called for partnerships between villages and the Government to ensure that livelihoods are improved.

“We must know how many technical people we have within the community, how many advisors, how many elders, how many children, what our needs are, what natural resources we have; lumber, semi-precious stones, other activities of interest or other items that we could develop for our need. Things like tourism; what type of tourism, and who will do it. So the VIP will allow us to take management control of our destiny within our communities and the Government, you see we have to be in partnership with this whole movement forward,” he said. 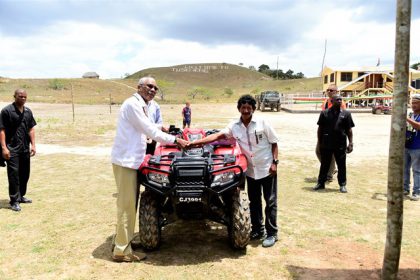 President David Granger hands over a All-terrain vehicle to the Community Development Officer.

Minister within the Ministry of Indigenous Peoples’ Affairs, Ms. Valerie Garrido-Lowe told residents that the Government is continually looking at ways in which they can provide opportunities to help residents in Indigenous communities to improve their livelihoods and in addition to the Hinterland Employment Youth Service (HEYS) and the Paramakatoi Tomato Project Facility, which will expand operations this year with the Canadian High Commission donating an additional solar drier, Government will soon be increasing jewellery making capacity in the Region.

“Next for this year in Region Eight also since we have so much semi-precious stones in this Region, a lapidary [facility] will be established in Monkey Mountain where the Toshao and  Councillors and the work men there have agreed to build the lapidary [facility] and the training of our youth to make beautiful jewellery; to polish and make beautiful jewellery out of these jasper, amethyst, crystals and stones that you have around,” the Minister told residents

Minister Lowe also used the opportunity to announce that the Government has allocated a sum of $1M dollars for support the hosting of the 2018 Pakaraima Football Tournament. In addition, the Ministry is also providing capacity building to help further improve the quality of the competition. “This is the first time something like this is happening for you through the Ministry of Indigenous Peoples’ Affairs. Many of the footballers; some sportsmen or women, maybe you have met Mr. Lawrence Griffith from the Ministry of Indigenous Peoples’ Affairs, who has been visiting villages to help you organise and establish your sports clubs properly, giving you the laws of the games so that you can really learn the sport so that you can compete at a national and international level,” she said. 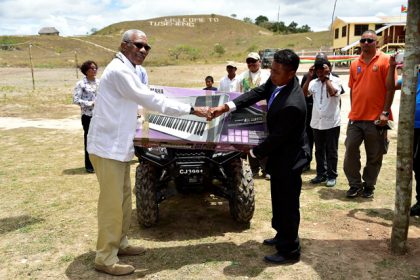 Regional Chairman, Mr. Bonaventure Fredericks used the opportunity to applaud the Government for improvements in infrastructure that the Region is already benefitting from, noting that while it may seem to be moving slowly, everything takes time.

“I can tell you Mahdia; the roads are still being concreted and in the very near future we’ll be having good roads. We’re enjoying some already. The road to Bartica is being upgraded… It’s being done. I could tell you they are as far as Denham Bridge, not quite finished but they’re still working on it. I was speaking to Minister Allicock last year and I was telling him Minister, the day when we can drive from Kanapang to Lethem [and] Georgetown will be a day when all our dreams as a Region will be so comfortable. One that will open up our Region to much more things that we have. We have a lot of potential. And as I speak, I was at the consultation of the hydro-plant that will be built at Kato just last week. So great things are in store for us in this Potaro-Siparuni,” he said.

Toshao Phillip Geronimo welcomed the President, the Ministers and all visitors, noting that this is the First time that a Head of State has visited the village and also the first time Tuseneng has hosted such a large event. He described the village as a growing community with a lot of potential and one which is known for its hardworking people. Among the things he said are critically needed is a supply of potable water.

President David Granger also handed over an All-Terrain Vehicle (ATV) to the Community Development Officer, a keyboard to the Toshao, along with a quantity of sport gear and kites for the children attending the event. The exhibition, though small, saw the participation and attendance from hundreds of residents of neighbouring villages, with some walking from as far as Paramakatoi to attend the event. 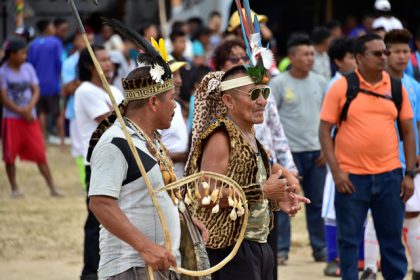 Two attendees at the Region Eight Regional Agricultural and Commercial Exhibition (RACE) 2018 dressed in traditional wear wait for the proceedings to begin. 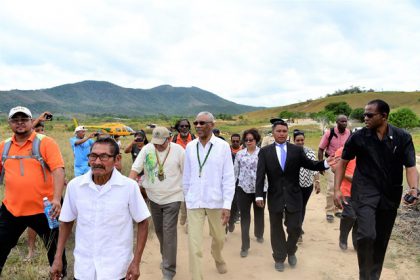 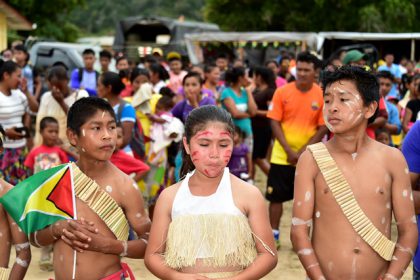 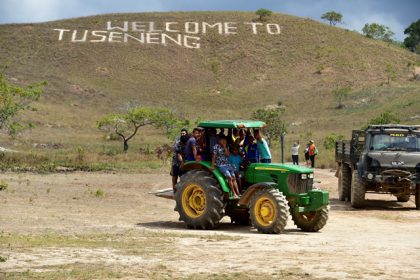 Off to the RACE at Tuseneng. 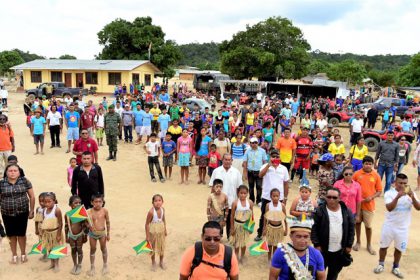 Part of the large crowd gathered at Tuseneng for the Regional Agricultural and Commercial Exhibition (RACE) 2018. 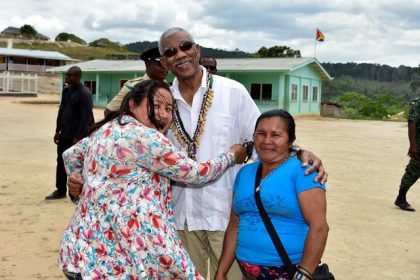 These women were thrilled to meet President David Granger. 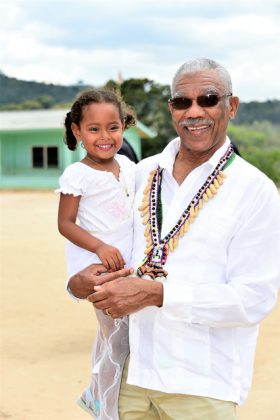