The Commission of Inquiry (COI) into the education system recently concluded in Region One, Barima-Waini. The public consultations were held in Moruca, Port Kaituma and Mabaruma where a number of issues were highlighted and recommendations made. 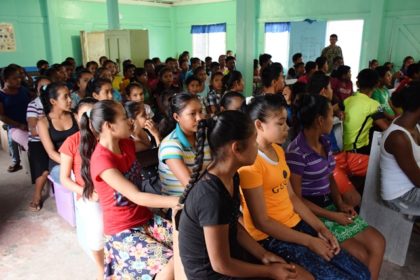 A section of the gathering in Moruca, Region One during the consultations of the Commission of Inquiry into the state of the education system

Teachers, parents, and regional education officials were among those who turned out to make their contributions. COI, Chairman Ed Caesar said he was very pleased with the attendance in the Region One leg of the consultations. “Persons were even standing outside the venue with umbrellas … So I was pleased, very pleased with the attendance,” Caesar stated.

One of the issues raised by teachers in the Region is that they have to conduct classes in an unclean and unfavourable learning environment. “Teachers and parents have been tasked according to the report of the consultations with having the place cleaned and our teachers are not very happy with that,” the Chairman explained. 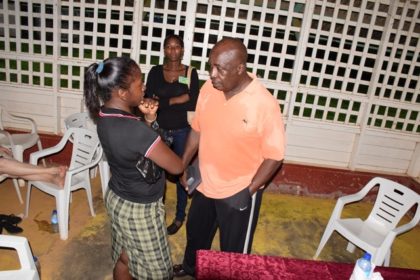 Chairman of the Education Commission of Inquiry, Ed Caesar in discussion with a resident from Port Kaituma, Region One

A request was made by both teachers and parents for the COI to make the necessary representations for the appointment of cleaners to the schools. 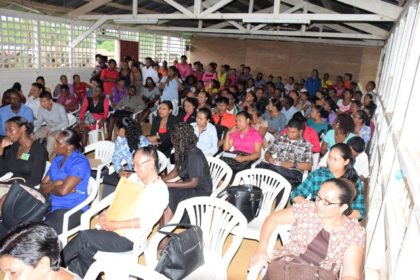 A section of the gathering in Port Kaituma, Region One during the consultations of the Commission of Inquiry into the state of the education system

Additionally, upon conclusion of the consultation, the chairman noted that it was realised that teachers are very much interested in their students’ development. However, Caesar pointed out that teachers are not given the opportunity for higher education; hence the development of the students is stagnated.

“There should be facilities to allow teachers either online, if the system is put in place internet wise or to be permitted to go to (University of Guyana) UG to get further training so they can impact on the development of the young people,” the chairman stated.

Another concern coming out of the consultations was feedback from teachers and parents stating that they are concerned that nothing will be done to address their problems. “I am going to ensure that the necessary recommendations are made and the minister has indeed promised he will do whatever he has to do to cause some better things to happen based on the recommendations from the Commission of Inquiry,” Caesar stated.

The Education COI will be taken to Bartica, Linden and Lethem next. The COI commenced in April and is expected to conclude in December 2016.