Regional Chairman (RC) of Region Six, David Armogan has expressed satisfaction with the pace of the capital works in the East Berbice-Corentyne region.

During a recent interview with the Government Information Agency (GINA), Armogan said that, “his office is pushing for a September deadline completion.”

Armogan explained that the regional administration saw an accelerated push in March and this has helped propel the works to be completed by the targeted month of September. He noted that the early awarding of infrastructural works to contractors has also assisted in pushing the region’s economic development, since Region Six is plagued by high unemployment rates. 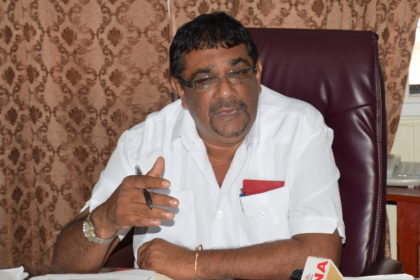 “We (RDC), had found out that there were severe declines in terms of the economic activity within the region which resorted to many businesses dismissing workers and that was pretty bad for the Berbice economy,” the Regional Chairman pointed out.

At least 60 to 70 per cent of the capital works has already been awarded to contractors. The sum of $6.1B was approved in the National 2017 Budget to cater for infrastructural works in Region Six, as well as for works in the agriculture sector, health care services and education delivery.

Armogan explained that the Ministry of Public Infrastructure has also assisted the administration with a number of infrastructural works including road works in East Bank Berbice.

During the 2017 National Budget presentation for Region Six, under infrastructural work, it was highlighted that several roads, bridges and government buildings will be rehabilitated, constructed and maintained.  The bridges highlighted to be rehabilitated include Vibert Bridge, East Bank Berbice (EBB), Calber Bridge, and New Vigilante among others while a heavy-duty bridge at Whim and a foot-path bridge at Chesney, Albion will be constructed.

The Regional Chairman noted that the agriculture sector in the region has been doing well, especially since the farming communities are currently harvesting their crops, and this is expected to be finished within the next three to four weeks.

“We have seen that the rice farmers in the Black Bush Polder areas have already harvested 95 per cent of their paddy, and even the rice farmers in the front lands have done the same to prepare for the next crop,” the Regional Chairman noted. He pointed out that the administration does experience difficulty with the farmers with regards to the provision of irrigation water since there are persons who are still harvesting whilst others are preparing for the next crop.