Georgetown, Guyana – (July 3, 2017) Minister of State, Mr. Joseph Harmon issued a call to members of the business community in the East Berbice-Corentyne Region (Region Six) to develop proposals for the way forward for the sugar industry over the next six months, as well as to pursue options for diversification, even as he urged them to explore non-traditional sectors and value added production.  The Minister made these comments, last evening, at a fundraising dinner hosted by the Berbice Chamber of Commerce at the New Amsterdam Town Hall. 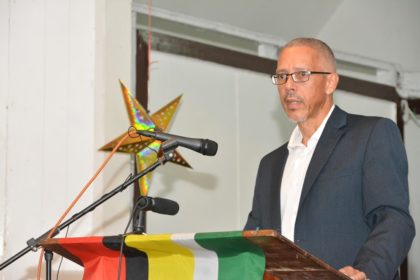 Minister of Business, Mr. Dominic Gaskin delivering remarks at the fundraising dinner held by the Berbice Chamber of Commerce at the New Amsterdam Town Hall​.

Noting that Government has embarked on a consultative process to determine what are the best options to ensure the viability of the industry, the Minister called on stakeholders in the region to be drivers of economic diversification as Guyana cannot continue to rely on what the President calls the six sisters; sugar, rice, timber, bauxite, gold and fish. “There are greater opportunities that present themselves for businesses individually or working with the workers’ union or workers’ organisations to take the benefit of what is going to happen in the short space of time,” Minister Harmon pointed out.

Minister of Business, Mr. Dominic Gaskin, who also spoke at the event, said that when the annual bailouts and investments in sugar are considered against the current price of sugar it is clear that things cannot continue as they are and Guyana has to expand local manufacturing. “This might be a good time for us to invest more in value-added productive businesses. If your imports aren’t selling, I can guarantee you that Guyanese want to buy local products. Guyanese are proud whenever we put quality local products on the market and this, for us, is a direction that we have been trying to nudge investors towards,” Minister Gaskin said.

Minister Harmon added that while it is the Government’s responsibility to continue to develop an investment friendly and more enabling environment for the growth of businesses, it is the responsibility of the private sector to tap into available resources to grow their businesses. Many of the concessions that were placed in the 2017 National Budget and resources allocated for Guyanese businesses are yet to be tapped into, Minister Harmon said. Private sector officials were encouraged to recognise Guyana as a single investment space and were called on to bid for contracts as well as invest in other parts of the country. “Step out of the box in which you operate and see that greater opportunities are available for you as business people,” Mr. Harmon said.

Minister of Public Telecommunications, Ms. Catherine Hughes told members of the private sector gathered at the 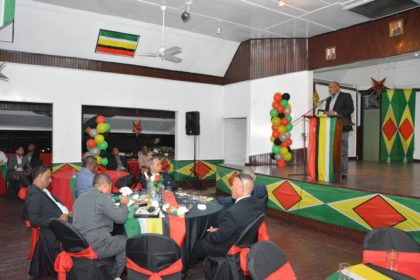 Minister of Business, Mr. Dominic Gaskin delivering remarks at the fundraising dinner held by the Berbice Chamber of Commerce at the New Amsterdam Town Hall​.

event that embarking on “out of the box” business ideas in the technological sector can result in profitable economic activity. Pointing to the use of robotics, Minister Hughes said numerous possibilities exist in the digitised environment and Guyana is poised to take advantage of the strides being made in Information and Communications Technology (ICT).

Meanwhile, newly elected President of the Berbice Chamber of Commerce, Mr. Ryan Alexander committed that the private sector in Region Six will be working arduously to seek other opportunities outside of the traditional sectors. He touted the idea of using the vast estate lands for the development of micro-enterprises.

Representatives of the Indian High Commission, members of the Upper and West Berbice Chambers of Commerce and other Government officials were in attendance at the fundraising dinner, which provided the opportunity for private sector officials to mingle with the Ministers as they discussed the future of the business in the region and how they can work together to push economic development.