The need to recruit staff to fill administrative positions was highlighted yesterday, when the Public Accounts Committee (PAC) held an extraordinary meeting with Regional Officials.

The necessity for staff, particularly in the financial departments of the regional Administrations was brought to the PAC’s attention by the Permanent Secretary (PS) of the Ministry of Communities, Emile Mc Garrel. 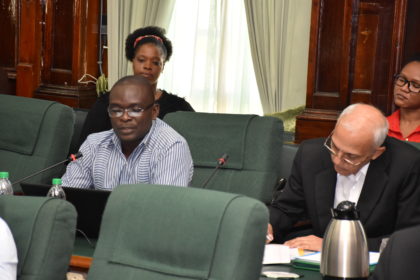 Permanent Secretary of the Ministry of Communities, Emile McGarrell making his presentation to the Public Accounts Committee

PS Mc Garrel informed the meeting participants at Parliament Buildings, that there are three chief accountants instead of the required 10.  This issue was among several that came to the fore during discussions about lapses and errors in regional administrations, in terms of handling procurement, contracts and finances.

PS Mc Garrel opined that the regional financial management system was negatively affected. He cited the example of the National Regional Accounting Unit which currently operates at 14 percent of its full staffing strength. The PS said an assessment showed that 260 staff members were required for effective management, but only 150 persons were employed in the unit.

The PAC was also informed that the need for staff was critical at the authorisation and certification levels in Regional Administrations.  Mc Garrel described this as, “Levels with responsibilities for checks and balances, the controls, to ensure the laws and regulations and that circulars are observed and expenditures for regional councils are in keeping what the requirements.” 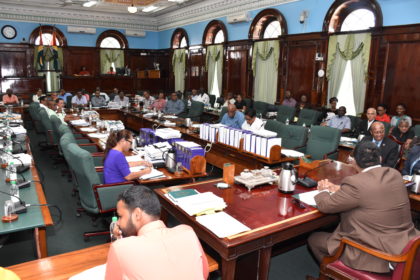 These challenges, he added, are further amplified at regional oversight and administrative levels.

The meeting was also notified by Mc Garrel, of the need for more Finance Secretaries, pointing out that up to a maximum of 40 accountants are needed, but there are only six.

He urged that immediate steps be taken to boost the system so it will be able to serve the residents, in the delivery of services being sought regionally.

Previously, the Regional Officials met with Ministry officials on the same day, for discussions on the financial management structures.  One of the issues brought to the fore during those discussions was the need for better inventory and internal control, across the Regions, in addition to having the  work of storekeepers and field auditors be upgraded.

In closing, Mc Garrel stated that the Ministry of Communities was aware of the problems and challenges. These were among issues addressed during a Regional consultation forum held earlier this year.

The PAC has the responsibilities to examine the audited accounts, as presented in the Auditor General’s Report, showing the appropriation of sums granted by the National Assembly to meet public expenditure, and such other accounts laid before the Assembly, and to exercise general supervision over the functioning of the Auditor General in accordance with the Rules, Policies and Procedures Manual and any other law.

It also nominates members of the Public Procurement Commission (PPC) for approval by the National Assembly, and thereafter, the appointment by the President and to determine the emoluments and allowances of the PPC members in consultation with the Commission.