The opportunity to recover cost in civil and commercial matters is especially useful in the Guyana context as the Caribbean region contemplates the evidence and access to justice convention.

As the Hague Conference on Private International Law (HCCH) wrapped-up at the Pegasus Hotel, Georgetown today, delegates from within the Caribbean were considering the aspect of legal aid that is afforded under the Convention.

Head of the International Legal Co-operation in civil matters at the Ministry of Justice of Brazil, Sâmia Cristine Farias de Albuquerque presented to the conference how the Evidence and Access to Justice Conventions was implemented in Brazil.

Justice Farias de Albuquerque pointed out that in Brazil, the Ministry of Justice in her country is the Central Authority for the conventions in both civil and criminal matters and other bases of reciprocity.

Brazil has had some difficulty in implementing the convention as the  language was a major barrier, coupled with uncertainty of the foreign country assigning the same level of access of justice to its nationals, Justice Farias de Albuquerque noted. 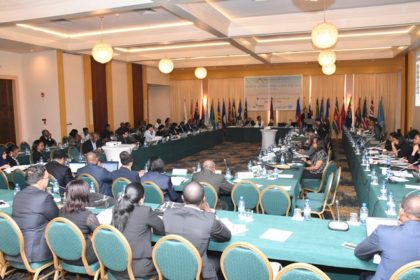 “In Brazil everybody can access the justice system with a public defence if you don’t have the money to pay for a lawyer. Anyone, you can be a Brazilian or you can be a foreigner resident or non-resident,” Justice Farias de Albuquerque said in her presentation.

This provision is provided even in civil matters, she noted. Further, Justice Farias de Albuquerque pointed out that the convention makes provisions for reimbursements to the states that are requesting evidence under the convention.

The revelation that Brazil most times provides legal aid to persons who access this convention, sparked discussion between legal practitioners at the conference from mostly Caribbean states.

Local mediator and Attorney-at-Law, Teni Housty remarked on the opportunities available for legal aid in this regard. “In the context of legal aid itself and access to justice, in Guyana,  legal aid is based on an economic threshold for the applicant…the opportunity to recover cost is actually a useful one that can be pursued and particularly pursued in an emerging Guyanese context.”

Guyana makes provision for access to legal aid in most criminal matters and in civil matters, aid is provided in divorce cases. There   are  similar provisions in at least five other Caribbean states represented at the conference.

Echoing Forte’s sentiments Belizean Supreme Court Judge Shona Griffith said, “We struggle to provide the criminal legal aid so I don’t know how it would be possible for civil legal aid.”

However, Turks and Caicos Islands Chief Justice Margaret Ramsay-Hale pointed out that the island states do offer legal aid in some civil matters, one being divorce. “But the state is competent to claw it back once the case is settled from the money that you’ve received. So if we helped you, we claw back all or some of it at the end of the day if you succeed,” Ramsay-Hale explained.

Latin American Representative of the Hague Conference on Private International Law (HCCH), Ignacio Goicoechea  pointed out to the delegates the Evidence and Access to Justice convention is purposed to eliminate discrimination between non-residents and non-nationals. Further, the convention does not require any implementation of mechanisms for legal aid.

Citing article one of the convention, Goicoechea told the delegates that nationals, “shall be entitled to legal aid for court proceedings in civil and commercial matters in each contracting state on the same conditions as if they themselves were nationals or habitual residents in that state.”

Further, “The only commitment that a state would assume in regard to chapter one which is legal aid is not to discriminate for residents or nationality,” Justice Goicoechea explained.

This means that states which cannot afford legal aid in civil and commercial matters, would benefit from non-discrimination abroad or against their nationals. The states which sign onto this convention are under no obligation to change their systems with regards to legal aid.