The process to relocate residents who are affected by the expansion of the Cheddi Jagan International Airport (CJIA) is progressing. Minister of Public Infrastructure, David Patterson revealed that the ministry has committed bigger lots to the affected residents.

“The residents we relocated would have the bigger lots in front of the rest of residents with a 100 x 100 lot while the others will receive 50 x 100 lots.” The Minister was addressing the media today during a tour of the ongoing works of the CJIA site where ground work was in progress to raise the low areas. 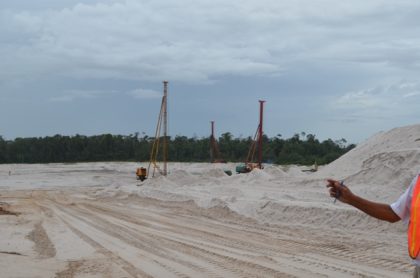 There will be a total of 57 house lots along with the installation of electricity and water for the new relocation scheme nearby the airport.

The Minister explained that the residents have signed on to the agreement with the government. “We are currently replacing two homes and let the residents inspect to ensure they are not short changed. You will see we’re replacing what you have, no expansion or deduction.”

The valuation department had visited the affected homes to inspect their dimensions. Following that, the team met with residents and confirmed that the inspection made was correct. “They (residents) will be the first persons to legally occupy certain areas”.

The Minister pointed out that the residents are satisfied with the relocation process.

One resident said, “Everything is good, I’m happy I’m waiting right now, to get into my property, the Minister is great, I give thanks for the Ministry of Public Infrastructure.”

The CJIA expansion project commenced on January 16, 2013 and is expected to be completed on December 1, 2017. The project was delayed due to unforeseen ground conditions, relocation of utilities of the Guyana Power and Light (GPL) and Guyana Water Incorporated (GWI) among others.

During today’s site visit, Ministry of Public Infrastructure’s Project Manager, Carmichael Thorne explained that US $37M of the project’s US$138M cost has been expended thus far. “These payments are the payments actually paid and confirmed received by contractors,” Thorne explained. 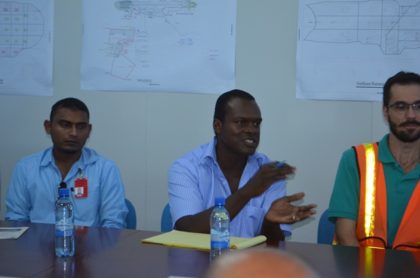 The CJIA expansion project is a design-build model and is being constructed by China Harbour Engineering Company Limited. The Government procured supervisory consultant to provide technical and supervisory support to the project to MMM Group & CEMCO Incorporation.

The project cost is grouped into three broad areas: the Design Build Contract for US$138M, Supervision Consultancy Services for US$3M and the Relocation of Airport Facilities for US$1.275M.

There will be a parking area to facilitate the aircraft. A new arrival building will be constructed whilst the existing terminal will be rehabilitated for additional space for departures only.

A New Diesel Generator Room, a Fire Pump Station, and a Boarding Corridor with Boarding Bridges will accompany the works.

A bridge will also be constructed for arriving passengers to have easier access to the terminal. “They would no longer have to walk to the terminal but they will be able to use an escalator or carrier,” Thorne said.