Mr Chairman; Fellow Ministers of Government, Ambassador to the European Union Mr. Jernej Videtič, Other Members of the Diplomatic Corp; Special Invitees; Members of the Press; Ladies and Gentlemen:

Thank you for being a part of this symbolic, but important signing ceremony. You would appreciate that, as Minister of Finance, I will always be most pleased and happy to participate in proceedings where new or additional financial resources are being made available to the country. This is especially so at a time when Britain’s vote to exit the European Union (Brexit) has sent shockwaves through the international community while creating uncertainty, fear and distress as to future relations between the European Union and the Caribbean, on the one hand, and between Britain and the Caribbean, on the other.

Guyana has always valued its relationship with the European, one of the largest donors to the country. From the Lome and Cotonou Agreements to the present Economic Partnership Agreement, our country has received significant support under the various financial facilities, not least among them the National Indicative Programme and the Regional Indicative Programme. The Government of Guyana (GoG) has benefitted from a number of European Union (EU) support projects and programmes, in varying sectors of the economy, over the years, with the Sea and River Defence sector consuming the bulk of the resources. In fact, outside of the Caribbean Development Bank (CDB), I believe it would be fair to say that the European Union is the only active donor in the sector. The EU’s partnership with the Government in this sector dates back to the 4th EDF in the late 1970s. Since the 7th EDF programme, which was signed in February 1994, the EU has contributed over 65 million Euros (nearly G$14 billion at current prices) towards the construction, rehabilitation and/or maintenance of approximately 35 km of sea defence structures in Regions 2, 3, 4 and 6. 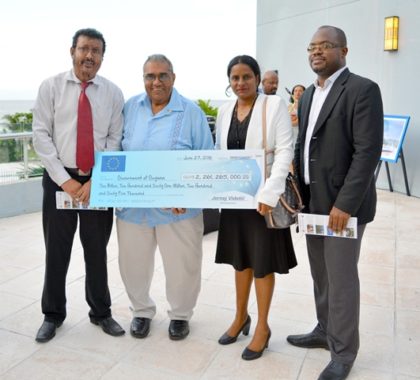 This has occurred at a time when climate change and other factors have aggravated a sea defence system that is severely stressed and compromised. We have canvassed a number of donors to support investment in this critical infrastructure, even as we roll out our strategic programme to link the hinterland with the coastland. This is in recognition of the fact that, on its own, the Government will not be able to mobilize the huge financial resources necessary to build climate resilient infrastructure to push back the ramparts of the sea. So we will have to depend on friendly donors, like the EU.

Each EDF programme has had its specific areas of focus. For example, whereas the 7th and 8th EDF focused on rebuilding critical sections of the sea wall, the 9th EDF provided a programme of sustainable maintenance coupled with capacity building and institutional strengthening to develop local management capacity in the Sea Defence Sector. The current 10th EDF will provide a total of 9.705 M Euros, through a Sector Budget Support Programme, which is linked to a number of target indicators relating to policy development, capacity building and risk-informed investment planning.

Our emphasis on the Sea and River Defence sector continues through the 11th EDF programme. The bulk of the 30M Euros is earmarked for this sector. Among the activities that will be pursued are the harmonisation of the legal framework, development of updated disaster risk management (DRM) policies and enhanced coordination of sector agencies. It also accentuates the fact that flood protection policy implementation requires the continued implementation of a robust risk-informed Sea and River Defence investment plan complemented by increased drainage capacity in critical flood risk areas. 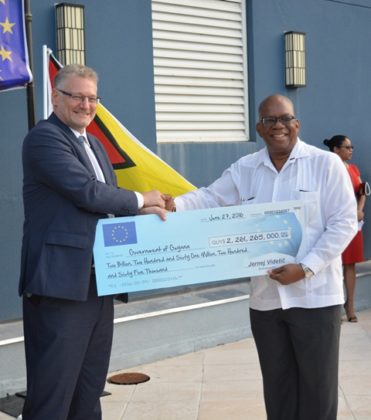 I do not want to give the impression that the EU gives away money easily. On the contrary, though grants, we have had to work hard to achieve certain set targets, before being eligible for the disbursement of these resources, under the 10th EDF programme. Among the conditions to be satisfied were a stable macro-economic position and satisfactory progress in the implementation of credible and pertinent reforms to improve Public Financial Management – all being essential parts of the development process.

Since coming into Office, in May 2015, the Government has developed and embraced a PFM Action Plan and has publicised both the PFM Action Plan and a Budget Transparency Action Plan (BTAP) on its information website. Significant progress has been made since then and by December 2015, we had already recorded a 72 percent achievement rate of all critical indicators outlined in this plan. The most notable improvements were the quarterly exchanges that have begun between the Office of the Auditor General and the Ministry of Finance which would see great improvements in the Government addressing a number of the concerns of the Auditor General in his annual reports and the significant strides made at the Guyana Revenue Authority to broaden the tax base and improve the efficiency and equity in tax collection.

Outside of the PFM Action Plan and the Budget Transparency Action Plan, the Government has shown and continues to show commitment to ensuring transparency in the operations of the government sector, and has been transferring, since 2015, the funds earned from the Lottery to the Consolidated Fund.  In addition, a number of dormant accounts as well as those which were operated in parallel with the Consolidated Fund (the Government’s chief bank account) have been closed and the monies transferred to the Consolidated Fund. Further, over 50 forensic audits have been conducted, indicating widespread fraud, corruption and mismanagement of resources under the previous regime. These audits are being studied with a view of pursuing administrative and/or legal options.

Under tremendous pressure last year, we were able to present the budget well in advance of the deadline. A mere five months after that presentation, the 2016 Budget was presented in January 2016, the earliest in recent history. it was welcomed with relief by all stakeholders, particularly the Line Ministries and the private sector, which were in a better position to plan and manage their affairs over a longer period, instead of the truncated budget year inherited from the previous administration. And, as disclosed by His Excellency President Granger, we intend to go one step further to restore budgeting to its rightful place in the management of public resources, when we will attempt to present the 2017 budget in December 2016. I may add that not only is this the intent of the Constitution and a requirement of the Fiscal Management and Accountability Act, but it is also one of targets of the PFM Action Plan referred to earlier.

Steady progress has been made to improve transparency in public procurement practices. This is in recognition of the fact that clear, consistent and transparent procurement processes are at the heart of anti-corruption measures and building people’s confidence in their government.  The principles of procurement, which underpin law-based governance, begin with competitive and open bidding processes and end with public access to audits and other information about procurement Thus, very early in the life of our Government, we established a new National Tender Board, increased the tender limits, expanded the pool of evaluators, among other initiatives. In addition, the Public Accounts Committee (PAC) has taken steps to set up the Public Procurement Commission (PPC) which will further develop a greater level of transparency and efficiency in the public procurement process.

More recently, the Government moved to establish the Bid Protest Committee, mandated by Article 52 of the Procurement Act. This Committee has been set up to address complaints of alleged wrong doing in public procurement (of the kind referred to in yesterday’s Kaieteur News). You would have noticed that the procedures governing the operations of the Committee were elaborately spelt out in an advertisement in yesterday’s Stabroek News, and was the subject of a news item in today’s Stabroek News. On wider PFM issues, the Government has announced a menu of measures to improve accountability and transparency, including the introduction of Anti Money Laundering legislation, the introduction of a Ministerial Code of Service, and the resuscitation of the Integrity Commission.

Let me close by expressing my satisfaction with the current programme and what it has delivered to the sector to date. This is a further demonstration of the strength and value of EU/Government of Guyana relations. That, notwithstanding, quite a lot of work remains to be done and with the continued and committed support of partners like the EU, I have no doubt that we will face the future with less trepidation.