The work being undertaken by the State Assets Recovery Agency (SARA), the Financial Intelligence Unit (FIU), the Special Organised Crime Unit (SOCU) and other related agencies has made it difficult for money launderers to use the remittance system to transact illegal financial transfers. 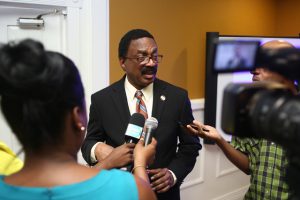 According to the AG, “what we are doing, is ensuring that we put the systems in place so that when we are assessed we are not found wanting.”

Guyana comes up for its fourth round of mutual evaluation in 2022 to be conducted by the Financial Action Task Force (FATF).

Countries that do not meet the requirements are subjected to strict measures, including blacklisting, which among the counter-measure, member countries are restricted from conducting financial and trade transactions with defaulters.

AG Williams said to avoid being blacklisted as experienced under the previous PPP administration, his chambers and the related agencies have been assessing their individual vulnerabilities in an effort to strengthen their capacities to tackle financial crimes.

Registries, Attorneys-at-law, accountants, notaries and other professions and agencies, he noted, have to be regularised, a process which is presently being undertaken.

While the AG could not comment on those persons under investigation for money laundering and other related crimes, he has assured that those found guilty will be prosecuted.

This too is a requirement of the FATF and Caribbean Financial Action Task Force (CFATF).

“If people are not charged it is clear we will be going into the swimming pool for the fourth round. You have to be effective, you have to have a lot of suspicious transactions reports sent from the FIU,” AG Williams pointed out.

The suspicious transactions reports prepared by the FIU have to be sent to the SOCU for investigations and where applicable charges and trials for convictions.